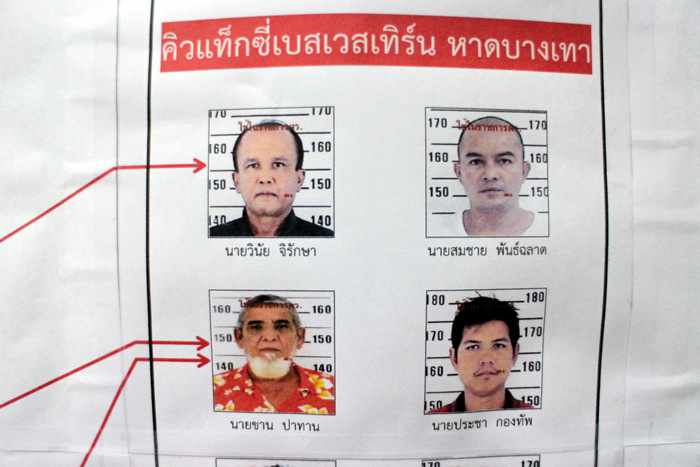 PHUKET: A deployment of 100 soldiers from Southern Thailand today provided military support to a huge task force of 1,110 police officers and 40 volunteers who swept along the west coast of Phuket to purge the island of illegal, violent, abusive and cheating taxi, tuk-tuk and minivan drivers.

The soldiers were acting under orders from Maj Gen Peerapol Wiriyakul, Commanding General of the 41st Military Circle, which operates out of the Fourth Army Area Command in Nakhon Sri Thammarat.

Over 70 drivers were taken into custody in a single blitz led by Lt Gen Panya Mamen, Commander of the Royal Thai Police Region 8 division.

“I assigned a squad headed by Maj Gen Paween Pongsirin to start tackling this problem on January 30,” Gen Panya told the press this afternoon.

“His team questioned the staff and owners of 51 businesses, totalling 150 witnesses, which led to 111 arrest warrants issued for 108 people,” Gen Panya explained.

In the blitz today, 32 warrants were served in Kata-Karon, eight in Thalang, nine in Cherng Talay and 27 in Kamala.

Although no drivers in Patong were arrested today, the Phuket Gazette has been informed that some of the 35 drivers yet to be arrested are based in Phuket’s main resort town – and the raids will continue tomorrow.

“Some of the suspects worked illegally as a taxi or tuk-tuk drivers,” Gen Panya said. “Others were legal, but were wanted for specific incidents, such as abusive or violent behavior, or for cheating tourists.”

All of the drivers arrested were denied police bail.

“Some of them face up to 10 years in jail,” Gen Paween told the Gazette.

“Mr Tawee surrendered himself to police today after a warrant for his arrest was issued,” said Gen Paween.

During the months-long investigation by Gen Paween’s team, officers discovered that an illegal taxi booth in Kata-Karon had electricity and running water supplied by the Kata-Karon Municipality.

“This is evidence enough that the illegal taxi operators were being supported by Kata-Karon Municipality. An arrest warrant for Mr Tawee was issued on that basis,” Gen Paween said.

Mr Tawee had long been at the head of local politics in Kata-Karon. He was elected Karon Mayor for the third term running in July 2012.

“If any tourists or business operators want to let us know about any wayward taxi and tuk-tuk drivers, let us know, and we will investigate,” Gen Paween assured.

Complaints can be filed at either of the two Department of Special Investigation (DSI) Organized Crime Centers in Phuket, said Gen Paween (click here).

“Or they can be filed at the local police station,” he added.

Considering Phuket’s growing tendency for local taxi and tuk-tuk drivers to stage blockades, when asked whether police were concerned that some drivers might try to protest at the police station, Gen Panya replied, “We are not worried. If they try to create a blockade, we will arrest all of them.”