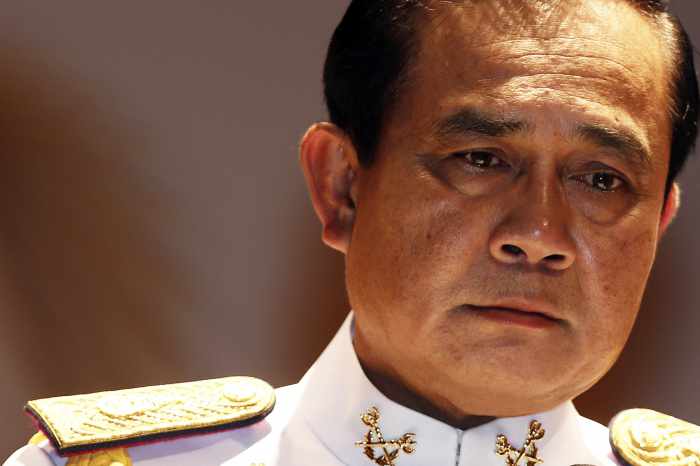 PHUKET: The National Council for Peace and Order (NCPO) has resorted to festive fairs, music, historical movies, preaching by monks, oath-taking and campaigns to woo grassroots support as part of its efforts to bridge the national divide and dissolve rival political colours.

In Bangkok, a fair entitled “returning happiness to the people”, featuring musical shows and free service was held yesterday at Victory Monument where anti-coup protesters staged a series of protest last week.

Traffic was not closed to motorists, as the Royal Thai Army Band and the Royal Thai Police Band plus the marching band from Ratchawinit School performed their show.

In the provinces, police, military officials, politicians, the media and political groups of different colours are joining activities to bring about reconciliation.

Democrat Party leader Abhisit Vejjajiva yesterday voiced support for the NCPO’s concept for a Reconciliation Centre for Reforms (RCR) to defuse conflict at grassroots level. Abhisit said using the bottom-top approach in wooing support from the grassroots and dissolving conflict might help bridge the national divide and bring about reconciliation the NCPO’s top agenda. However, problems might arise during the three-month period that the NCPO has outlined in its plan to achieve peace and order. During that time, the country would be run without the separation of legislative and administrative branches, he said.

Abhisit called on the NCPO to allow transparency in the 2015 fiscal budget that might exceed Bt2 trillion, allowing public participation in checks and balances with the same standards of disclosure presented to Parliament.

He said the council should also open channels to get public feedback on the operation of development projects.

“If the public thinks any project is 30 per cent overpriced, it should have the right to present ways to reduce the budget. This would be one way to combat corruption, otherwise the council’s special administration would be questioned.

“Budget monitoring and checking is a must, as NCPO chief General Prayuth Chanocha has said there would be no Parliament till the end of the fiscal year,” he said.

Abhisit suggested that the council allow information disclosure in development projects in the same way the Thai Khemkaeng (Strong Thailand) project had a central website to show details of mean prices, auction procedures and the progress of projects.

Lampang Governor Thanin Supasaen led his guests to watch the Thai biopic titled the Legend of King Naresuan the Great, the historical elephant battle at Central Plaza’s theatre in the province. More than 300 people of different political camps, who had earlier been summoned to report to the 32nd Military Circle,l were among the guests invited to watch the movie.

The governor said the entertainment was part of the NCPO’s activities to achieve reconciliation by using movies to nurture a sense of unity and love of the motherland. The atmosphere at the theatre was filled with hospitality and friendship.

In Kalasin, some 100 soldiers and police conducted a public relations campaign to woo grassroots support with a musical parade featuring various types of drums, the rhythm creating a cheerful, fun and a reconciliatory atmosphere for shoppers and traders at the local markets. They also distributed leaflets to explain the NCPO’s plan on how to achieve national reconciliation.