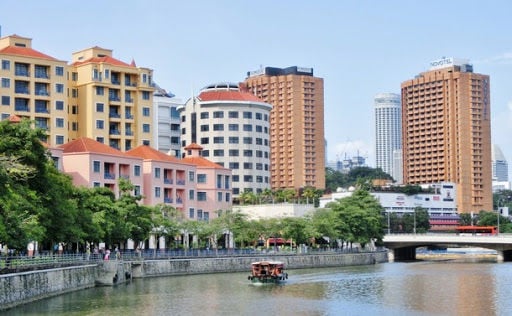 A group of British men staying in Singapore were prohibited from working there again after breaking the local lockdown to go on a “bar crawl”. The men each received a fine of around S$9,000. They were all charged after a photo of them drinking together during the country’s “lockdown” went viral last month.

A different party, comprising an American couple and an Austrian, were also disciplined for drinking on the same day. The court heard the men met by accident on May 16, in Robertson Quay, a popular bar and restaurant hang out near the city centre.

The party – 30 year old Neil Gordon Buchan, 37 year old Perry Scott Blair, 33 year old James Titus Beatt and 35 year old Joseph William Poynter, went to 3 bars in about 45 minutes. Although the bars were not open as usual, they were allowed to serve alcohol.

On the same day, a Facebook post went viral showing pictures taken by a passerby of people drinking in groups that evening. The post questioned why locals in state run housing were being punished for violating the lockdown laws when others could apparently “drink freely without masks.”

The prosecutor begged the judge to jail the men for a week but the court levied a fine instead. The court heard that they had no previous convictions in Singapore and their lawyer had objected to the “bar crawl” description.

The second group, including an American married couple 40 year old Bao Nguyen Brown, 52 year old and Jeffrey George Brown, went to the Quay to buy Indian food, but stopped to buy takeaway beer. They bumped into an Austrian man, 45 year old Michael Czerny, and offered him a beer. The court heard they drank and chatted for half an hour. They were fined 8,000 Singapore dollars each.

The Singapore Ministry of Manpower said 6 of the 7 people fined for drinking at Robertson Quay have been permanently banned from working in Singapore. They did not specify who was exempt, but the court heard that Czerny has permanent resident status, and therefore does not rely on a work pass.

Two other British men have been charged for drinking in Robertson Quay on the same day, but their cases are pending. MoM said between 1 May and 25 June that 140 people had their permission to work in Singapore for breaking the Covid-19 measure.

Despite recent denials, NokScoot is closing down