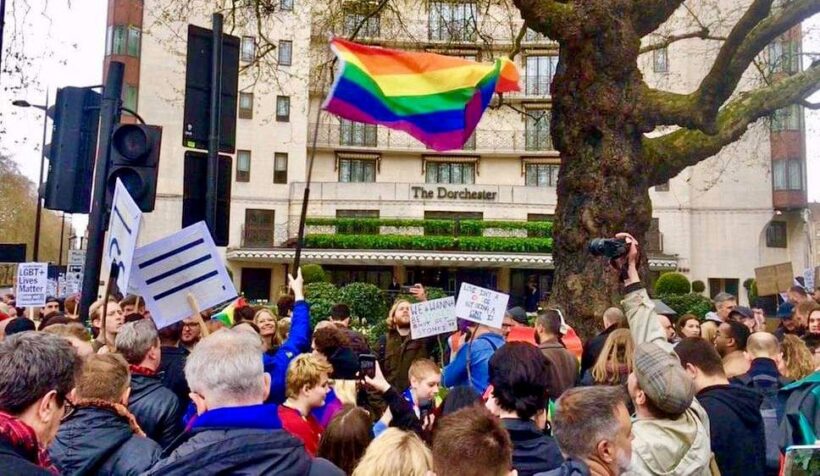 Anti-discrimination demonstrators staged a protest outside the Brunei-owned luxury Dorchester Hotel in London yesterday. The protest is part of ongoing protests around the world over the tiny South East Asian Sultanate of Brunei’s adoption of harsh new Sharia laws. The new laws include death by stoning for gay sex and amputation of hands for theft.

The Dorchester Hotel is majority owned by the tiny nation situated on Borneo Island.

The London protests were headed up by human rights activist Peter Tatchell, where up to 100 people gathered outside the famous Park Lane hotel, many armed with rainbow flags demanding a revocation of the new draconian laws.

A tough penal code in the tiny country, ruled as a monarchy by Sultan Hassanal Bolkiah, came into force last Wednesday after several years slowly ramping up Shariah law in the Sultanate.

It has sparked a storm of global criticism from politicians, celebrities and rights groups, with actor George Clooney, pop star Elton John and TV host Ellen Degeneres, among others, calling for Brunei-owned hotels to be boycotted around the world.

“If the Sultan will not listen to reason and compassion we believe the British government should sever all diplomatic, economic and military ties with the regime,” said Tatchell.

Brunei is part of the wider British Commonwealth but the historic bloc of British colonies has so far resisted calls for a stronger response over the penal code, including expelling Brunei from the Commonwealth.

Brunei is also part of the ten ASEAN-country trading bloc. ASEAN leadership, at this stage, has been silent on the implantation of Sharia Law.

Deutsche Bank has removed the Brunei-owned Dorchester Collection group from the list of hotels its employees use and Virgin Airlines Australia said its staff would no longer travel on the Brunei state-weened airline and would consider its current code-share agreement with the airline.