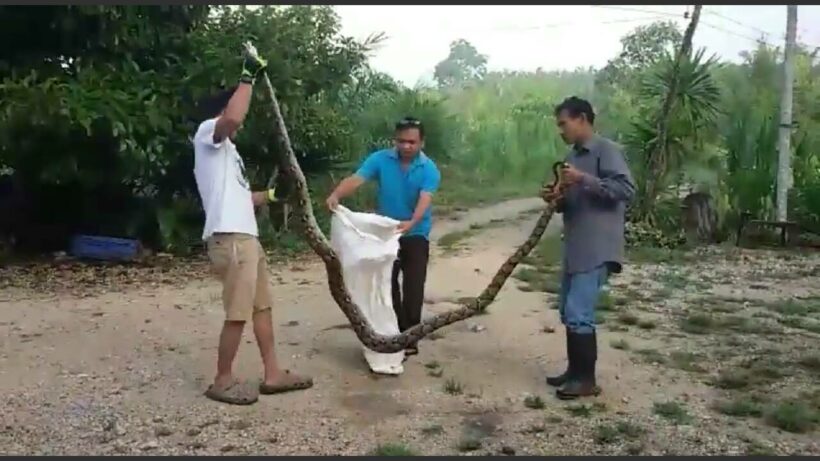 A 4 metre long python has been found in the Lamtab District of Krabi yesterday (April 3) after it ate a few chickens that belong to a local man. Earlier, he said he also found a smaller python getting into his fishing trawl cage in a camel nearby.

The Tek Ka Jee Kung Koh Lamtub Rescue Team received a report about the python from 38 year old Rittirong Kongkaew that a python had eaten his chicken. They found the reptile next to his house and it took them about 10 minutes to capture it. The reptile was 3.8 metre long and weighed 15 kilograms.

Rittirong said that few a chickens started disappearing earlier but he didn’t know why.

On Monday night he says he was picking up the trawl that he placed in the canal near his house and found a 2.5 metre long python stuck in the trawl.

He managed to capture this one by himself and released it back into the jungle. However early yesterday he went to fish again and after he brought the trawl ashore he heard a dog barking loudly nearby his house so he went to check and found the 3.8 metre python crawling around the chicken coop. He tried to capture it but said this one was too strong so he had to call the rescue team.

Arms smuggler or getting ready for a crime? Songkhla resident nabbed in Satun.