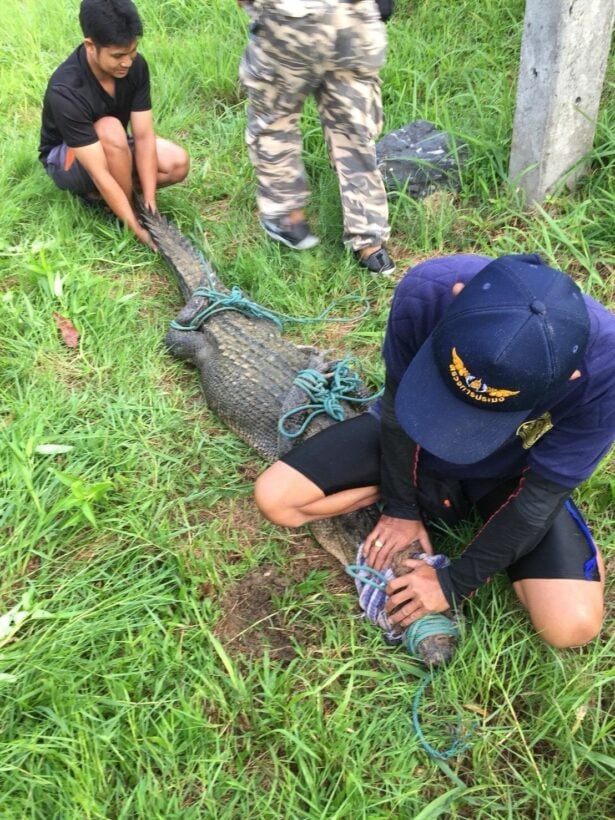 Experts believe that ‘Yanui’, the crocodile caught yesterday off Layan Beach, is not from the wild. The crocodile tried to return to land several times during its 12 days swimming in the sea along the west coast of Phuket, prompting croc experts to think it has been raised in captivity.

Expert says that Yanui is a female crocodile which was measured to be 2.5 metres and weighs about 150 kilograms (during the eleven day pursuit the reptile was variously reported to be anywhere from 1.2 to 3 metres in length – now we know!). No microchip was found on her so it’s believed that the crocodile hasn’t been registered, then abandoned or escaped.

Phuket’s Governor Norraphat Plodthong says, “This crocodile is believed to have been raised in captivity as moss has been found on it. The crocodile might have been kept in an enclosed pool for long time. The crocodile also tried to come up on land several times. Experts say that if it was a wild crocodile it wouldn’t come near people.”

Owners of crocodiles in Phuket have been told to register them with the Phuket Provincial Fisheries Office before August 10, 2018, or they will face legal action.

Read more about the compulsory registration of Phuket’s crocodiles HERE and HERE.

Croc breeders, you have until August 10 to register your crocodile – Phuket Governor