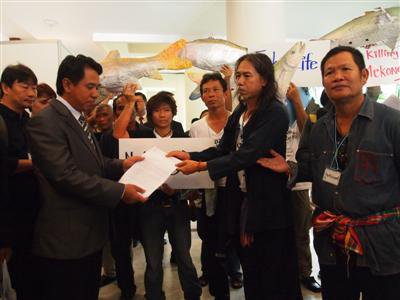 PHUKET: Residents of eight Thai provinces along the Mekong River traveled to Phuket to protest construction of the Xayaburi Dam in Laos during a three-day meeting of the Mekong River Commission (MRC) that ends today in Phuket.

The protesters gathered on Tuesday morning at the Movenpick Resort, which is hosting the “Mekong 2 Rio” conference of high-level delegates from Mekong Basin states and their upstream partners.

Members of the Network of Thai People in 8 Mekong Provinces were there to greet them with a peaceful protest, but threatened to close the Thai-Laos Friendship Bridge to traffic if their demands to halt construction of the Xayaburi Dam upstream in Laos go unheeded.

Among the uninvited guests were members of the Network of Thai People in 8 Mekong Provinces led by Niwat Roykaew.

The network came to the conference in order to ask the MRC to reconsider construction of the Xaiyaburi Dam and a number of other dam projects along the Mekong.

“The Xaiyaburi Dam in Laos will cause a huge damage to ecosystems, as well as the lifestyles of people who live along the river in all four countries. We are here today to give this letter of complaint to the MRC Council members of Thailand, Laos, Cambodia, and Vietnam,” said Mr Niwat.

The complaint made two specific charges: that construction of the Xayaburi Dam violated a 1995 agreement among all four member countries that “any action that will cause any impact or damage to the Mekong river will have to be agreed by all members of the four countries first.”

The second grievance was that the Laos government violated an MRC resolution made in December last year when it awarded Thai construction firm CH Karnchang Public Company Ltd a 51-billion-baht contract to build the 32-meter-high dam, with electricity generation capacity of more than 1,200 megawatts.

The Laos government failed to complete a study informing other member states of project impacts before awarding the contract, Mr Niwat said.

The network called for CH Karnchang PCL to cease work on the project and asked four Thai banks to stop servicing loans to the company.

The protesters also called on the state-run Electricity Generating Authority of Thailand (EGAT) to cancel a “secret contract” made with the Laos government to buy the electricity from the project after it goes into operation.

Niwat Roykaew said that if no action is taken, he will lead the network to protest “until the issue is resolved”.

“The Xaiyaburi Dam construction has already begun. If the MRC still ignores the issue, we have no choice but to gather up at the Thai-Lao Friendship Bridge in Nongkhai province. We will go there and close down the bridge until someone comes up with a solution,” said Mr Niwat.

A spokesman for the MRC told the protesters that members of all four member states had acknowledged the opposition to the project, which would be a topic of discussion during the proceedings.

The MRC would inform everyone of the results of its talks, he promised.

In his opening comments before delegates, Thai Natural Resource and Environment Minister Preecha Rengsomboonsuk said the main objective of the conference was to discuss management of food, water, and energy needs among all stakeholders, maximizing resource use while minimizing environmental impacts.

Among the 350 delegates attending were representatives of 14 foreign river basin organizations, two regional organizations, as well as government and private groups responsible for water management from around the world.

Mr Preecha said Thailand would use the many panel discussions to share with their counterparts from Laos, Cambodia, and Vietnam what they learned from the devastating floods of 2011.

Hans Guttman, Chief Executive Officer of the MRC, said, “Rapid development in the Mekong region has put increasing pressure on water resources, especially in terms of food and energy production.

“This conference will enable the region to learn from other basins, widening its perspectives and expertise in order to efficiently manage the Mekong resources. We hope this forum will offer the same opportunities for the others,” said Mr Guttman.

The MRC website states that the Mekong 2 Rio conference will principally look into current trends of water uses to meet food, energy and water needs and how they are connected to and affect each other.

“The Mekong 2 Rio conference will send a message and add a water dimension to Rio+20, the United Nations Conference on Sustainable Development, to be held next month in Rio de Janeiro, Brazil, whose themes are a green economy in the context of sustainable development and poverty eradication and the institutional framework needed,” the MRC states.

Laguna Phuket Marathon to take “Chi Running’ in its stride