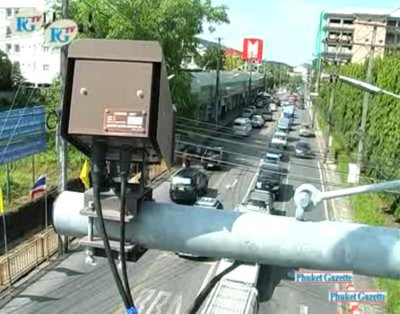 PHUKET: Phuket Gazette readers overwhelmingly think the installation of radar speed cameras to monitor road traffic and automatically fine violators will be the most helpful of six projects recently approved for Phuket by Cabinet, according to our most recent online poll.

In the poll launched March 23, readers were asked which of six projects approved by Cabinet during the “Mobile Cabinet Meeting”, headed by Prime Minister Yingluck Shinawatra, would do most to help the province.

More than half of all readers (52.8%) thought that the 17-million-baht project to install a network of radar speed cameras would be the most beneficial.

The second most popular choice, at 21%, was ‘Improvements to Chao Fa East Road’: 20mn baht.

Fourth, at 4.5%, was a water pipeline from Baan Bangjo to Phuket International Airport: 24.8mn baht.

The speed camera project was the top choice among all three demographics. Almost three-quarters (72%) of tourists chose this option, followed by 57% of Thais and 47% of local foreign residents.

Local foreign residents were far more likely (27%) to opt for improvements to Chao Fa East Road than their Thai counterparts (11%) or tourists (7%).

To vote in the new poll click here or on the ”Vote” icon on the right side of the page.