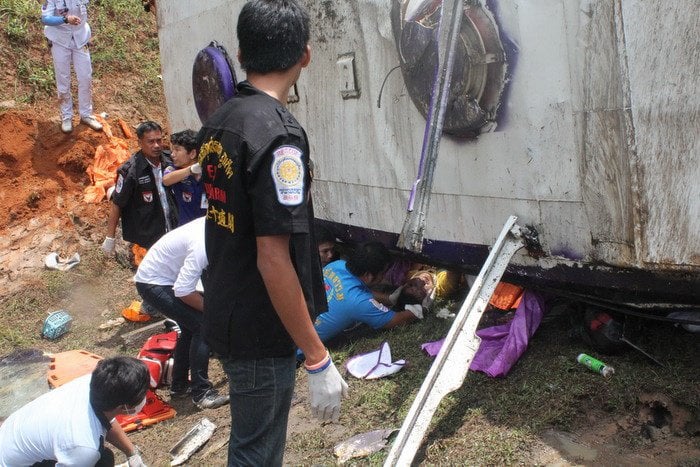 PHUKET: Four Chinese tourists who were seriously injured when their tour bus flipped on Phuket’s bypass road yesterday are still in hospital recovering from their injuries.

The accident occurred at about noon, opposite the Premium Outlet on the southbound side of the road (story here). The bus was transporting 16 Chinese tourists, along with a tour guide, a guide assistant and the driver, from Phuket to Krabi.

Five people became stuck under the bus when it rolled onto its side, confirmed Maj Pornthip Chumsri of the Phuket City Police today.

“It took about one hour to recover all of the passengers from the bus. They were immediately rushed to hospital once they were freed,” said Maj Pornthip.

Thongkum Sae-Lee, 23, the tour guide assistant, sustained serious wounds but has already been discharged by doctors. The remaining tourists and the driver suffered only minor injuries and have also been discharged from hospital.

Police questioned the driver, 25-year-old Danai Kumdee, and were told that he lost control of the bus during heavy rainfall.

“The driver picked up the tourists and drove them to lunch at the Bypass Seafood restaurant. After lunch, the driver went to make a u-turn to head toward Krabi,” said Maj Pornthip.

“It was raining heavily, and Mr Danai lost control of the bus during the u-turn, causing it to flip onto its side.”