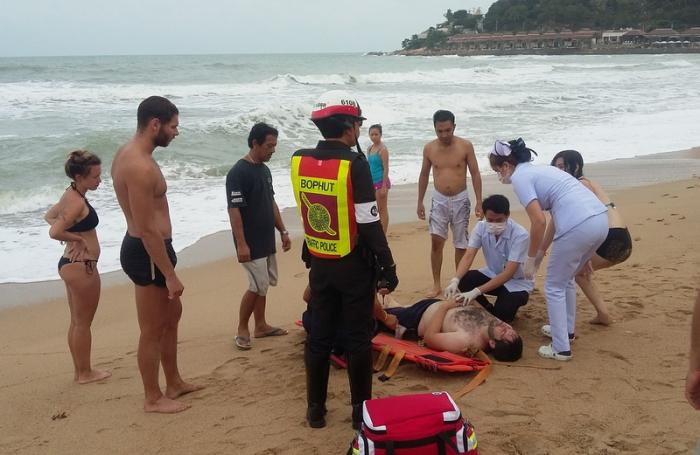 SAMUI: Two Russian tourists luckily escaped drowning on New Year’s Day when a group of expats dove in to rescue them from ferocious waves at Chaweng Noi Beach in Koh Samui.

Officials had placed red warning flags advising the public not to swim that day due to the rough seas, but the man and woman, both believed to be in their early 30s, reportedly ignored the signs and went ahead anyway.

Numerous sunbathers watched in horror as the two were being swept out to sea. Longtime Koh Samui resident Cord Biggs, who was playing beach volleyball with three friends about 40 meters from the shore, quickly jumped in to rescue them.

“We spotted the couple being swept out, screaming and panicking in the water. No one on the crowded beach was taking action, so my friends and I ran down from the court and started swimming toward them,” said Mr Biggs.

Mr Bigg’s friends were named as Andre Malvestiti, Johnny Gherardi, and Cristiano Cappellacci. Staff from The Beach Bar threw them lifebuoys as they reached the water.

“I went for the girl first as she appeared to be in greater danger. Andre joined me, but while we were trying to bring her back, the other tourist was getting swept out further, so I swam out to him. While I was bringing him back, however, Andre and the girl started going out further, so I had to go back out and get them,” said Mr Biggs.

“Luckily, a surfer came to us as I was struggling and he was able to get her on to his board. It was very difficult for me and I ended up tossing the buoys away and fighting the rips to make it back.”

All four rescuers and both tourists reached the shore safely. The couple was transported to Thai International Hospital by ambulance and made a full recovery.

Mr Biggs and his friends are being hailed as ‘authentic heroes’.

“Please watch out for the red flags on any beach and if you see those, do not swim. Thanks to my volleyball boys for having my back, and [I wish] good karma for all of us as we start the new year,” he concluded.