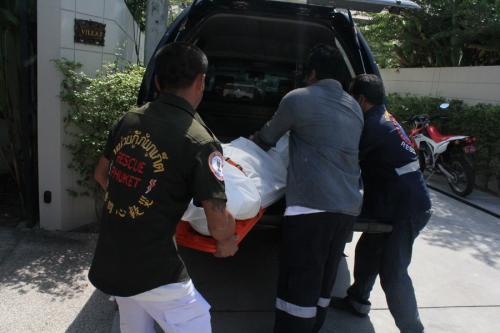 PHUKET: Police are hoping that assistance from forensics investigators will help unravel the cause of death of a Russian tourist whose body was found in his Phuket resort villa yesterday.

Chalong Police Deputy Superintendent Jumroon Plaiduang was called to a resort in Soi Na Tai in the southern Phuket beach area of Rawai (map here), at about 1:30pm.

“We found blood on the sofa in the living room, and on the floor not far from the sofa were an empty half-bottle of Thai whiskey, an empty vodka bottle and a few empty bottles of Lipo [the Thai energy drink Lipovitan-D],” said Lt Col Jumroon.

“About 10 meters from the sofa, we found the body of Mr Ievgenii Porithkov, 44, from Russia, wearing white shorts and a yellow shirt. His body was sitting up, leaning against the sink cabinet in the kitchen,” he said.

“He had a deep cut on the back of his head. There were some bruises on his forehead and around his eyes. We believe he died about four hours before his body was found,” Col Jamroon added.

On questioning Mr Porithkov’s travel companion, police learned that the two men arrived on holiday in Phuket about a month ago.

“They rented two rooms in the resort and stayed separately. Mr Porithkov liked to drink. He often spent the whole day in his room drinking alone. He was last seen at 10:30am on the day he died. His friend did not know Mr Porithkov had died until police informed him,” Col Jamroon said.

“We believe he died from drinking too much alcohol. However, we do not know how he came to have the cut to the back of his head. Resort staff said they did not notice anyone coming or going from the villa in the hours before Mr Porithkov’s body was found, so we are continuing our investigation with the help of forensic police in the hope we can establish the cause of death,” he added.