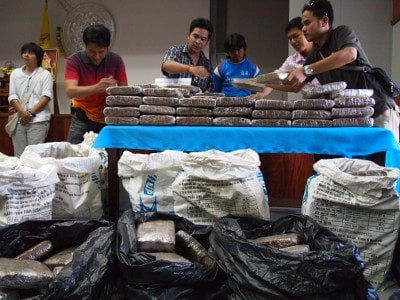 PHUKET : Phuket police yesterday seized 400 kilograms of marijuana worth an estimated 20 million baht in a raid in Rawai.

Also presented were 400 one-kilogram bricks of compact marijuana allegedly seized from his home.

The stash was discovered under a staircase in Mr Sompong’s house following a tip-off from an informant, police said.

Police estimated the street value of the haul at 20 million baht, making it one of the biggest marijuana busts on the island.

Chalong Police were tipped off by an informant that a “major” marijuana dealer in Rawai had received a large drug shipment two months ago, police said.

Acting on the tip, police set up a sting operation and arrested Mr Sompong in possession of an unspecified amount of marijuana near Chalong Circle.

Police then went with Sompong to his house where a search revealed the 400kg stash under stairs leading to the basement.

Police said that they are pursuing three more suspects who they believe worked with Mr Sompong in shipping the drugs, Maj Gen Pekad said.

He said he believed that Phuket was just a transit point for the marijuana to be sent elsewhere.

Governor Tri added that Phuket’s widespread drug problem is a major issue that needs to be solved through cooperation with drug suppression units.

Mr Sompong was charged with possession and intent to sell Class 5 narcotics (marijuana).