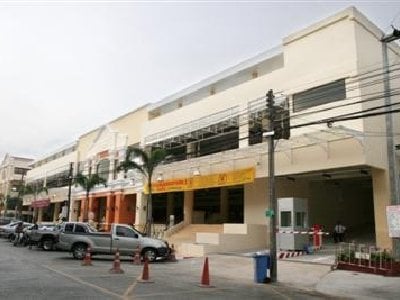 PHUKET: Although vendors and city officials continue to haggle over costs, the new wet market on Ranong Road will open by the end of the month, Phuket City Municipality says.

Provincial Deputy Governor Teerayut Eimtrakul served as chairman of the meeting and many government office chiefs were present as witnesses.

It was the third such meeting aimed at finding a way to get the vendors into the new facility, structural work on which was completed over a year ago.

Mayor Somjai said the market should be open by the end of August as 319 of the 425 vendors with rights to occupy stalls had already signed contracts with the city.

The vendors, who have since June 2008 been working out of a temporary market set up for them free-of-charge by the municipality on Wirat Hongyok Road, made five requests to the city during Monday’s meeting.

First, they asked for a reduction in the 15,000-baht-per-square-meter fee the vendors need to pay for construction of the custom-built stalls they will occupy.

Mayor Somjai said the fee was based upon an agreement made at a public hearing four years ago, when both sides accepted that the city would cover 65% of the total construction costs and the tenants would pay the remainder. This fact and the municipality’s current financial situation made it impossible for the municipality to pay more, she said.

Mayor Somjai accepted that the rate was high, but said it was the only way to ensure the market remains in the hands of Phuket Town residents.

The third request by the vendors was to extend the contract rental period from 20 to 30 years.

To this, Mayor Somjai reminded them that all 425 vendors who traded at the old market had been provided space in the new market, even though they had no formal documents guaranteeing such rights when they were at the old market. The municipality had protected the vendors by not putting the right to operate stalls in the new market up for auction on the open market, she said.

“Twenty years from now, the municipality will be run by a new generation of Phuket people, and I believe these people will renew the contracts when the time comes,” she said.

The fourth request was that the municipality help vendors with bad-credit-history secure loans from the Bank for Agriculture and Agricultural Co-operatives (BAAC), the only financial institution that accepts stall-rental rights as collateral on loans.

The fifth request was to help fix improperly designed or constructed stalls to better meet vendor’s needs. An example given was that of the stalls built for pork butchers, which currently lack sufficient under-counter storage space and have racks unable to support the weight of the meat that needs to be suspended from them.

On these two points, Mayor Somjai recommended the vendors ask for help from Deputy Mayor Watcharapong Anantrakul, who oversees the financial and construction aspects of the market business.

The vendors were also reminded that the contract for the temporary market on Wirat Hongyok Rd ends tomorrow. However, those that have already signed contracts with the city cannot move in immediately because more time is needed to ensure all utility systems are working properly, Mayor Somjai said.

The cost of the new project has now reached 280 million baht, which includes 186 baht in construction costs and 24 million baht for the temporary market. The municipality also had to repay a bank loan taken out to fund the project.

“The Municipality has a budget of about 75 million baht annually for town development, but we cannot use it all for the market. It must be divided among many necessary projects. Moreover, it is unfair to other city taxpayers if the municipality bears all construction costs when only the vendors stand to benefit directly. Had we done it that way, we would have been obliged to put the stall rental rights up for auction, but we didn’t. I think the 65% / 35% split is reasonable and fair,” she said.

Regardless of this, the vendors’ representatives left the meeting unsatisfied and the same issues will likely be raised again at the next meeting, to take place August 18 at Phuket City Hall.