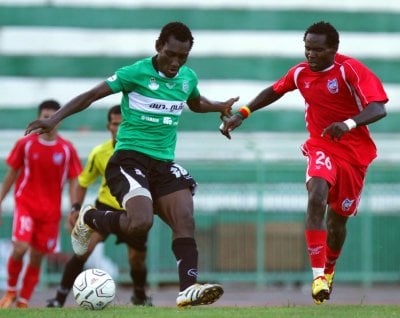 PHUKET: The Division Two South title in the AIS Regional League is within easy reach for FC Phuket following a comfortable 2-0 win against Hatyai FC at Surakul Stadium yesterday evening.

FC Phuket went into the match brimming with confidence, having put together back-to-back league wins after the surprise loss to Yala FC.

FC Phuket started the match brightly, but steady play from Hatyai keeper Phisit Treeyapong kept them off the board in the early stages. At 25 minutes in, FC Phuket’s Ivory Coast midfielder Diarra Ali got the scoring underway when he stroked a free kick around the wall and into the bottom right hand corner of the goal from 25 yards out.

Diarra almost made it 2-0 a few minutes before the half, but his header was well tipped over the bar by the Hatyai keeper.

Phuket’s second goal came at 75 minutes, when midfielder Camara Ahmed made up for a missed opportunity just minutes before by drilling a shot low, past the defenseless keeper, following an intricate series of passes deep in the Hatyai end.

Although the league title is still not a mathematical certainty for the Southern Sea Kirin, only a series of extremely improbable results would prevent the team from finishing first.

Manager Arjan Songsamssub is pleased at the progress, but warns that the playoffs will present a very tough test for his side.

“We have to win one more game. All the teams in the playoffs are very strong, so it will be very hard for us. I believe we can do it and I hope we can do it,” he said.

Other AIS Regional League Division 2 (South) games played over the weekend saw three teams lose at home, including the second straight home loss in as many weeks by struggling Satun FC.