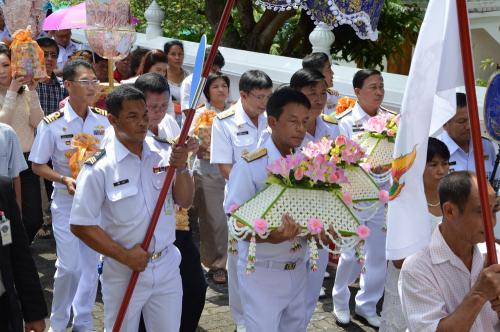 PHUKET: Temple administrators at Wat Kata yesterday received a donation of over 1.2 million baht as part of the Kathin Ceremony, held each year to mark the end of the Buddhist “month of gratitude”.

The donation was presented by officers from the Royal Thai Navy, joined by Karon Municipality officials and a gathering of about 2,000 other Buddhist disciples.

“The donation will go toward fixing the dining hall and other parts of the temple,” Naval Civil Affairs Director Thammawat Malaisukkarin told the Phuket Gazette.

Wat Kata, formally known as Wat Kitti Sangkaram (map here), is the temple that is responsible for administering and maintaining the tourist-popular Big Buddha image that sits atop the Nakkered Hills that splay behind the temple.

The Kathin Ceremony is a traditional Buddhist festival held to mark one lunar month since the end of the Rains Retreat, the annual three-month period during which many monks are ordained.

“There was a parade from the Karon Municipality offices [in Kata] to Karon Circle and then to Wat Kata to mark the festival,” Mr Rachan said.

“We all are very happy to join this ceremony. This event helps to bring together all facets of the community. It is good to preserve this Buddhist festival so that young people understand it and learn that it is important,” he added.