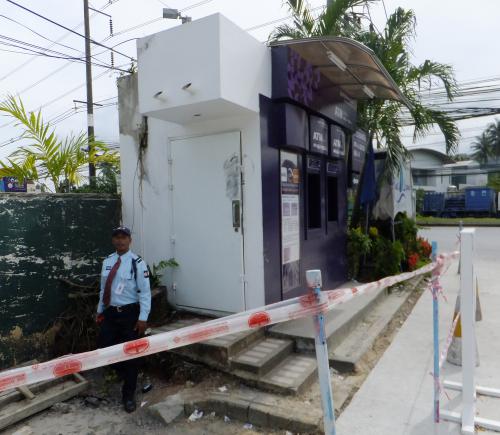 PHUKET: Thieves used a blowtorch to make off with an estimated 1.6 million baht from an ATM at the entrance to the Boat Lagoon this morning.

The theft, at a Siam Commercial Bank ATM, was discovered at about 11am by an employee who had come to service the machine.

“The thieves broke the lock on the door of the building that housed the ATM,” said Phuket City Police Superintendent Sermphan Sirikong.

“Inside, there was the smell of burned metal. They had used a blowtorch to break through the back of the machine,” he explained.

When the employee reported the theft to the head office in Songkhla, they told him that the CCTV had stopped recording images at about 2am. They didn’t investigate because blackouts happen often in that area, Col Sermphan said.

A taxi driver at a nearby stand noted that the entrance to the Boat Lagoon is always dark at night because the roadway there is under construction and the lights aren’t working.

“There was no security at the entrance gate and hardly anyone walking around there after 11pm, so it would have been pretty easy to break into the ATM without being detected,” he said.

Police are collecting fingerprints and checking other CCTV cameras in the area, Col Sermphan said.