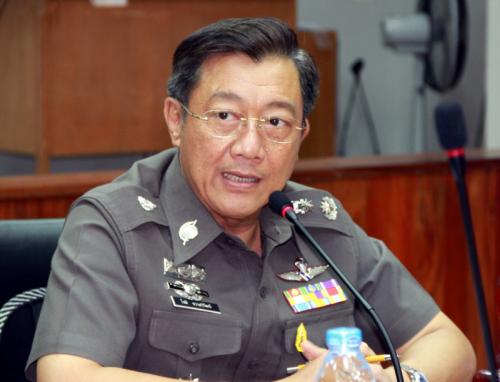 PHUKET: Phuket’s top cop has increased security measures across the island in the wake of Deputy Prime Minister Chalerm Yoobamrung’s warning of possible Al-Qaeda and Salafist terrorists attacks on the United States consulate in Chiang Mai this month (story here).

“Although the information gathered pointed to terrorist plans to target the United States consulate in Chiang Mai, we will not ignore the possibility of Phuket being targeted, as many tourists from around the world visit Phuket and their safety is of utmost concern to us,” Phuket Provincial Police Commander Choti Chavalviwat said yesterday evening.

Orders have been sent out to all police stations on Phuket to keep a careful watch for any suspicious activity and report back to Gen Choti.

“We have increased the number of officers at the Tah Chat Chai police checkpoint, which is the main land gateway to Phuket. Customs at Phuket International Airport have also been asked to carefully search suspicious objects and passengers,” he said.

Officers have been spread out across tourist-dense areas in Phuket, including Patong, Kata and Karon, Gen Choti explained.

“We have also asked for the cooperation of locals and hotel staff, as well as beach and restaurant vendors,” he added.