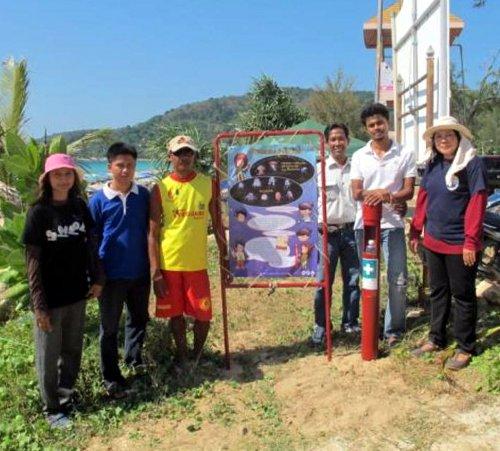 PHUKET: A collaborative effort between the Phuket Marine Biological Center (PMBC) and the Phuket Provincial Public Health Office has seen educational signs about jellyfish springing up on beaches across Phuket.

“The signs are set up on popular beaches, not because there are many jellyfish in those areas, but because they have so many visitors,” Phuket Marine Biological Center (PMBC) Director Ukkrit Satapoomin told the Phuket Gazette yesterday.

“The signs have been put up to educate people about how to avoid being stung by jellyfish, and what to do if they are stung.

“People shouldn’t panic just because we put signs up – dangerous jellyfish are not common in Phuket,” Mr Ukkrit said.

“We have attached a bottle of vinegar to the signs as well, which can be used to reduce the pain of a sting before going to see a doctor,” he added.