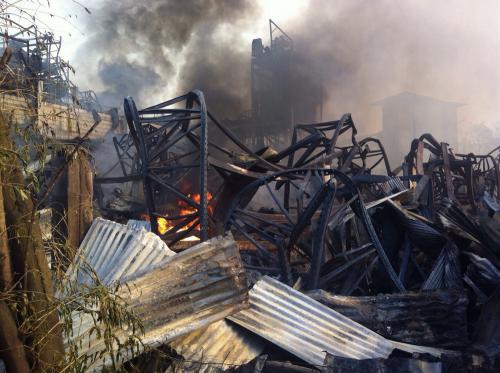 PHUKET: Flames continued to ravage Phuket’s renowned SuperCheap megastore this morning, stifling any efforts to search for victims caught in the inferno that broke out at the huge shopping facility last night.

Fresh reinforcements of firefighters arrived early today to relieve those who battled the flames throughout the night. Plumes of smoke continued to rise into the morning sky.

“Firefighters are doing their best, but parts of the building are still burning,” Phuket Vice Governor Sommai Prijasilpa told the Phuket Gazette.

Two firefighters were injured during the night.

“They were cut by sharp objects while fighting the fire, but thankfully their injuries were not serious,” Vice Governor Sommai said.

“At this stage, we still don’t know how long it will take to put out the fire completely,” she added.

The area surrounding the building remained sealed off, while investigators from the Phuket Forensics Police attended a briefing to prepare themselves for entering the facility.

The number of people possibly trapped by the fire could reach into the hundreds, though Phuket City Police chief Sermphan Sirikong was reluctant to estimate how many people may have died in the blaze.

“We are co-ordinating our efforts with forensic police officers who will soon enter and search the building,” Col Sermphan told the Gazette.

“I cannot comment on how many people died in the fire until officers inspect the building,” he said.

Throughout the night only one missing person report was formally filed at the incident center set up in front of the shopping center.

“After 2am, security guard Jongdee Chinthai was reported missing, but he was reported found alive by 8am today,” Vice Governor Sommai confirmed.

“I have been waiting all night to hear any news of her. I got here at about 9:30pm, as soon as I found out about the fire,” Ms Anong told the Gazette.

“I have very little hope that she is still alive. I am preparing myself for the worst,” she tearfully told the Gazette.

Vice Governor Sommai said the fire had damaged at least six houses in the vicinity.

Rassada Mayor Phudit Raksarat ordered his officers to conduct a door-by-door check to confirm how much damage local houses have sustained and to determine whether any local residents need assistance.

“We have about 200 police officers at the scene and about 300 rescue workers from Phuket and Phang Nga standing by,” Vice Governor Sommai said.

“We’re doing the best we can,” she added.