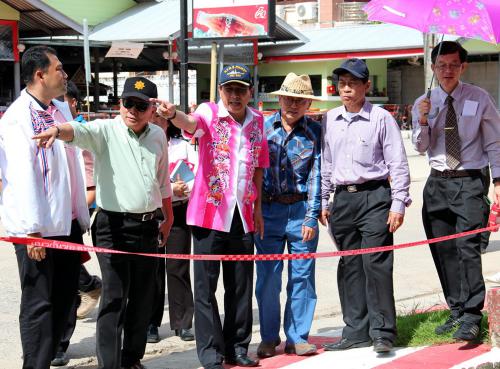 PHUKET: Patong’s flood problems will be 85 to 90 per cent solved by the middle of next year, Phuket Governor Maitri Inthusut predicted this week.

In addition to the 19 million baht gate that will be added to the canal at the south end of Patong, (story here), 9.7 million baht in funds have been requested to dredge the Pak Bang Canal, he reported during a tour of flood-prone areas in Patong on Tuesday.

“About five points in the canal, a total of 2.6km, will be dredged,” he said, adding that the Phuket office of the Department of Disaster Prevention and Mitigation had already applied for the funds.

“That project will be done by March 2014,” Governor Maitri said.

The chronic floods at Patong Police Station and Patong Hospital will also come to an end, he predicted.

“We’ve given the problem a lot of discussion,” he said. “The solution for this particular area is to install one more set of drains,” Governor Maitri said.

He noted that about 30 meters of the proposed drainage system was on private property, and that Patong Municipality would need to contact the owner to get permission before work could commence.

While on the topic of drains, the Governor vowed that Phang Muang Sai Kor Road, with drains along both sides of it, would be finished by March 2014.

Though the Governor said that the planned measures should be able to control most future flooding, he added a caveat: “It still depends on the rain. And people need to stop throwing trash into the canals, because it blocks the waterway.”