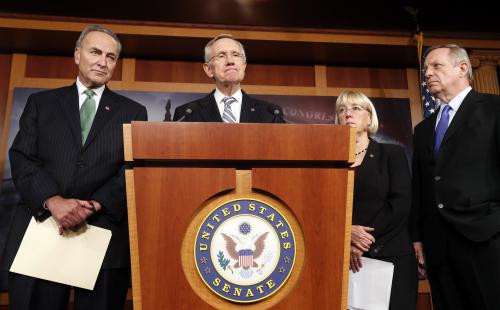 
U.S. Senate passes deal to end debt crisis
Reuters / Phuket Gazette
PHUKET: The U.S. Senate approved a deal on Wednesday to end a political crisis that partially shut down the federal government and brought the world’s biggest economy to the edge of a debt default that could have threatened a global financial calamity.

The Republican-controlled House of Representatives was expected to take up the measure later on Wednesday after Speaker John Boehner dropped the party’s efforts to link the spending measure to changes in President Barack Obama’s healthcare law.

The deal, however, offers only a temporary fix and does not resolve the fundamental issues of spending and deficits that divide Republicans and Democrats. It funds the government until January 15 and raises the debt ceiling until February 7, so Americans face the possibility of another government shutdown early next year.

U.S. stocks surged, nearing an all-time high, on news of the deal.

The stand-off between Republicans and the White House over funding the government forced the temporary lay-off of hundreds of thousands of federal workers from October 1 and created concern that crisis-driven politics was the “new normal” in Washington.

Senator John McCain, whose fellow Republicans triggered the crisis with demands that President Barack Obama’s signature “Obamacare” healthcare law be de-funded, said on Wednesday the deal marked the “end of an agonizing odyssey” for Americans.

“It is one of the most shameful chapters I have seen in the years I’ve spent in the Senate,” said McCain, who had repeatedly warned Republicans not to link their demands for Obamacare changes to the debt limit or government spending bill.

The Senate passed the measure on an 81-18 vote, and the House was expected to follow suit, clearing the way for Obama to sign it into law no later than Thursday, when the Treasury says it will hit the $16.7 trillion debt ceiling.

Fully reopening the government was expected to take several days. While essential functions like defense and air traffic control have continued, national parks and agencies like the Environmental Protection Agency have been largely closed.

Although the deal would only extend U.S. borrowing authority until February 7, the Treasury Department would have tools to temporarily extend its borrowing capacity beyond that date if Congress failed to act early next year.

The agreement includes some income verification procedures for those seeking subsidies under the healthcare law, but Republicans surrendered on their attempts to include other changes, including the elimination of a medical device tax.

While analysts and U.S. officials say the government will still have roughly $30 billion in cash to pay many obligations for at least a few days after October 17, the financial sector may begin to seize up if the deal is not finalized in both chambers.

The planned votes signal a temporary ceasefire between Republicans and the White House in the latest struggle over spending and deficits that has at times paralyzed both decision-making and basic functions of government.

The political dysfunction has worried U.S. allies and creditors such as China, the biggest foreign holder of U.S. debt, and raised questions about the impact on America’s prestige. The Treasury has said it risks hurting the country’s reputation as a safe haven and stable financial centre.

Senate Majority Leader Harry Reid and Republican leader Mitch McConnell announced the fiscal agreement on the Senate floor. It was expected to win approval after a main Republican critic of the deal, Senator Ted Cruz of Texas, said he would not use procedural moves to delay a vote.

The agreement is a victory for Obama, who held firm and refused to negotiate on changes to the healthcare law, and a defeat for Republicans who have suffered a backlash from the American public, according to public opinion polls.

It was unclear if Boehner’s leadership position will be at risk in the fallout. But several Republican lawmakers suggested he may have strengthened his standing among the rank-and-file, who gave him a standing ovation at an afternoon meeting.

“He just said we live to fight another day and we all need to go out and vote for it,” said Republican Representative Devin Nunes of California, who had opposed the government shutdown strategy of his colleagues.

The fight over Obamacare rapidly grew into a brawl over the debt ceiling, threatening a default that global financial organizations warned could throw the United States back into recession and cause a global economic disaster.

“Even though the market is moving up, this is a real historic event that is happening here so there is pause and concern,” said Frank Davis, director of sales and trading at LEK Securities in New York.

“You are seeing a lack of activity because it’s hard to invest in a market where you don’t know what’s around the corner.”

The Dow Jones industrial average and the Standard & Poor’s 500 Index ended the day up nearly 1.4 percent.

Fitch Ratings had warned on Tuesday that it could cut the U.S. sovereign credit rating from AAA, citing the political brinkmanship over raising the debt ceiling.

A resolution to the crisis cannot come soon enough for many companies. American consumers have put away their wallets, at least temporarily, instead of spending on big-ticket items like cars and recreational vehicles.

Many political pundits and Democratic Party politicians have predicted for weeks that a faction of Republicans in the House would drag out the crisis before making a last-minute deal.