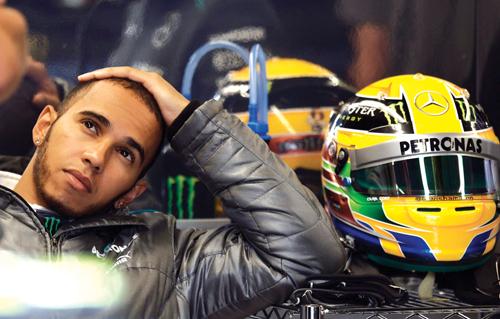 PHUKET: The Lions destroyed Australia, England is cruising through a shattered Australia in the Ashes, Andy Murray triumphed at Wimbledon and Chris Froome won the Tour de France. As Britons tower over world sports, Lewis Hamilton must be considering his chance of continuing this newfound tradition, starting with a win in Hungary this weekend. Can he do it? Mercedes has been exemplary in qualifying, so either Lewis or Nico Rosberg is quite likely to be on pole on Sunday. But Mercedes struggles with tyre degradation in race conditions.

The Hungaroring is a hot twisty low-speed track with a dirty surface and very few overtaking opportunities. It will reward a good aerodynamic set-up, a driver not easily bored, and the ability to conserve tyres. Qualifying well is crucial, but it’s not enough. It’s been a long time since the last race, so remember, Hamilton was on pole in Germany, but was roundly beaten off the grid by both Sebastian Vettel and Mark Webber. Hamilton could not match Lotus or Ferrari, either. P5 was more than he had a right to expect. Rosberg achieved nothing after a nightmare Q2.

Drivers will wish to qualify well, but also avoid starting on the dirty side of the track. In 2013, that has been a huge disadvantage, and at Hungaroring, I see it as a significantly worse disadvantage than most. Anyone starting on the dirty side risks losing two places at the start. Look for some tactical manoeuvring on that. Remember last season in Austin when Ferrari deliberately broke the seal on Massa’s gearbox after qualifying, to earn him a five place penalty, and thereby elevate Alonso to the clean side of the grid.

Prior to this season, Sebastian Vettel had never won his home Grand Prix, or any race in the month of July. He sprinted past Hamilton on the grid, and although both Lotus drivers had the potential to beat him, he won and extended his world championship lead. Webber also beat Hamilton off the line, but his right-rear wheel was not attached when he left his pit stop on lap nine, so it bounced and cracked a cameraman. Webber went a lap down, made that up under the safety car, and took P7 on the penultimate lap. Red Bull is looking very powerful, but in Hungary, is not my favorite to win. Mercedes should out-qualify them, and Lotus may out-perform them.

Lotus had a great day in Nurburgring. They are back in contention, with Kimi Räikkönen’s P2 and Romain Grosjean’s P3. Grosjean was within half a second of Sebastian Vettel and we had glorious vision of Grosjean doing something really dangerous and taking both Vettel and himself out of contention. It was not to be. Lotus decided that Kimi should play through on the 55th lap. The team had a cunning plan to run soft tyres on Kimi’s final stint. Like so many cunning plans, it was a failure, and Grosjean might have had a better chance of winning. Kimi would have done better not to pit for soft shoes as well, but a problem with his radio, stopped him telling them that. Anyway, 33 points for the Constructors’ Championship slightly closed the gap with Red Bull. The Hungaroring will play to their ability to manage tyres in the heat.

I had high hopes for Ferrari in Germany. And I was disappointed. They gambled by starting Fernando Alonso on worn mediums. I am not sure it was any help. He finished P4, but Felipe Massa took an exotic and terminal spree into the gravel on the fourth lap. Massa’s retirements are getting monotonous, and he needs to pull something out of the hat in Hungary. Alonso should do well at the Hungaroring, perhaps better than Vettel.

McLaren has not got its act together, but in Germany looked nearer to being a real team than for a long time, and finished P8 and P9. Sauber was as mediocre as ever in Germany, and we have just heard that Sergey Sirotkin is expected to drive for them next year. Sauber’s new Russian partners seem to be behind the stunt, which would smash Jaime Alguersuari’s record as the youngest ever grand prix rookie. I doubt if that is what Sauber needs when it loses Hulkenburg, one of the best drivers around.

Force India was disappointingly slow in Germany, but in the Silverstone testing, Adrian Sutil was second fastest, beaten only by Vettel, so perhaps they are ready to go up a notch. Toro Rosso lost Jean-Eric Vergne to a hydraulics problem in Germany, and Daniel Ricciardo, who is a very pretty driver, struggled. He wants to impress Red Bull for a seat next season, and he certainly did that in the Silverstone testing.

Williams did not improve in Germany, and their pit stops were agonizing. Williams has signed engineer Pat Symonds as their chief technical officer to revive their brand. Symonds won world titles with Michael Schumacher and Fernando Alonso, but was banned for five years for his part in fixing the 2008 Singapore GP.

Marussia contributed significantly to the excitement when Bianchi’s engine let go. The empty parked car hung around for quite a while and then rolled rearwards
leisurely down the slope, and cross the track. The resultant safety car was a rare treat for Nurburgring.

The new tyres tested at Silverstone seem quite similar to their predecessors, so do not expect any radical changes.

The race is on Sunday at 7pm and qualifying is on Saturday at the same time. Join me at Join me by the big screen at Phuket’s Green Man, Chalong (click here for map), where we may also have a Big Surprise.