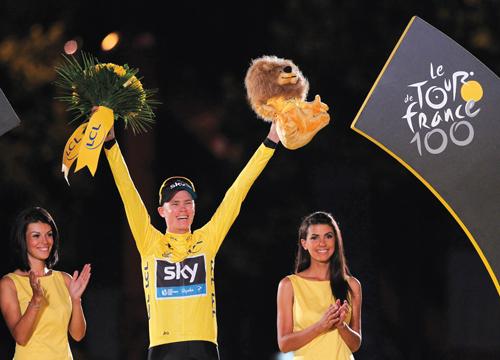 PHUKET: First, the bald facts: Chris Froome has triumphed in the hundredth edition of the Tour de France. Last year, victory was claimed by Froome’s Sky team-mate, Sir Bradley Wiggins. Remarkable? Absolutely. They are the first Englishmen to win the world’s most prestigious and demanding cycle race since its inception. By any standards, it is a most extraordinary achievement.

Not only a British triumph, the 21-stage race over 3,500 kilometers has also been one for the purists, the most competitive Tour for some years. Although the mountainous course was probably the most demanding ever, it was consistently exciting, with more breakaways and more riders chancing their arm. The hill finishes were some of the most punishing and hotly contested in recent memory. Even to complete the tour is an athletic feat of the highest order.

If anything, Froome’s achievement is even more emphatic than that of Sir Bradley, whose dominance was based on his superiority in the time-trials. He not only finished four minutes clear of his nearest rivals, but demonstrated an all-round prowess that enabled him to win three stages, including a grueling summit finish at the top of Mont Ventoux.

Even in the last climb of the tour, a climb which humiliated his nearest rival Alberto Contador, he was able to contest the finish. Froome is, moreover, young enough to win the race again and again – a calm, collected young man with remarkable strength of will and powers of recovery. One of his teammates, Ian Stannard, remarked: “He’s definitely changed as a leader. He takes on more responsibility. He [has] really lifted his game.”

As he reached the line on the darkening cobbles of the Champs Elysees, arms linked with his Sky team-mates, and applauded by 350,000 Parisian spectators, one could see the emotion he so clearly felt. As he said later:

“Crossing the line with [the] guys brought tears to my eyes. I expected it to be big, but this is something else.” Ever modest, he referred to the healthy state of British cycling: “The youngsters coming through and the way the sport is moving… [is] something to be proud of.”

Much of the credit must go to Sir Dave Brailsford, who predicted in 2010 that Britain would have a winner by 2015. Well as Sky Chef de Equipe he has master-minded not one, but two victories, two years ahead of schedule.

Of course, the vexed subject of doping came up like a bad penny. Cycling has been badly scarred by drug scandals in recent years with American Lance Armstrong stripped of all seven of his Tour victories and Spaniard Alberto Contador’s 2010 crown expunged from the records. The 2013 Tour de France may well have been the first “clean” race for a very long time.

Both Froome and Brailsford welcomed the new openness in the sport, with Brailsford offering the World Anti-Doping Agency all the data relating to his rider’s performances. Sky also gave the information to French sports paper L’Equipe, where it was analyzed by a researcher. He found no anomalies.

Froome himself declared: “I’m glad I’ve had to face all those questions [from the press]. After all the revelations of the past year, I’m glad it has been channeled towards me.”

In a massive boost of confidence for the race, he concluded: “I’ve been able to deal with it. The peleton is standing together.” It augurs well for the future of this legendary event.