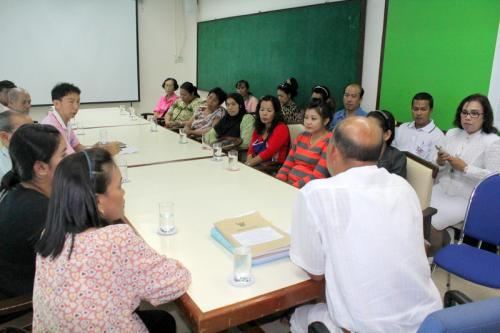 PHUKET: More than 30 vendors with stores located opposite Vachira Phuket Hospital in Phuket Town have appealed to the Phuket City Mayor to reverse the decision to install no parking signs in front of their shops.

The new signs, which prohibit parking in the area from 7am to 6pm, were installed on May 16 as a way to try to alleviate heavy traffic congestion in front of the hospital (map here).

“The vendors are in trouble and this is hurting their income because customers cannot stop to buy things like they used to. Police will fine them when they see them parking in the no-parking zone,” he said.

“They need the municipality to revert to the old signs, which banned parking only from 7am to 9am and from 4pm to 6pm. This will help the shop owners to get their customers back,” Mr Pairoj added.

“The traffic around the hospital is very congested. People living in the area filed complaints to us about it, so we tried to solve the problem by establishing the no parking zone,” he explained.

“I will discuss this problem with the Phuket City Traffic Police and try to find another solution that does not affect the vendors,” Mr Thawatchai added.