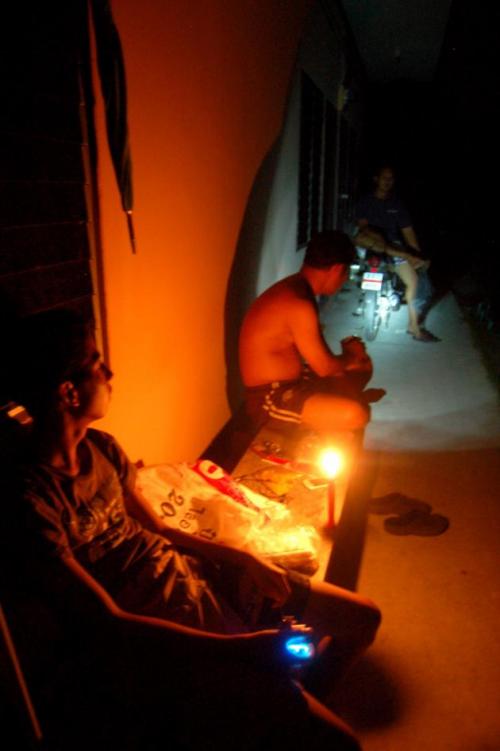 
Businesses demand action as officials downplay power cut
The Nation / Phuket Gazette
PHUKET: Tourism officials downplayed the impact of Tuesday night’s power outage in the South, but tourism operators and the country’s biggest private-sector association expressed fears for their business and demanded the government take steps to ensure that such a situation does not happen again.

Suraphon Svetasreni, governor of the Tourism Authority of Thailand, said its office in the Southern region had collected information on the effects of the power cut, which hit 14 southern provinces on Tuesday evening, and found nothing to worry about so far. Phuket International Airport continued normal operations because it has generators able to provide power for more than three hours.

The blackout hit at around 6.45pm, and lasted until 10.45pm in some parts of the South.

Most of the big hotels also have their own generators. The businesses that suffered the biggest impact were stand-alone spa outlets without their own backup generators. Some bookings were cancelled as a result.

“This blackout had a minimal impact because it lasted for a short period and operators had generators,” he said.

However, Piyaman Tejapaibul, president of the Tourism Council of Thailand, was more concerned about the possible impact of the blackout, saying it could lead to a slight drop in confidence among foreign tourists.

She said precautionary plans should be put in place. She will bring this issue up with the tourism committee chaired by the minister of tourism and sports.

But Suraphon was confident the tourism industry will still move ahead in the remaining months of the year and attract 24.5 million foreign visitors for the whole of 2013. From May 1-20 alone, there were about 1.2 million foreign tourist arrivals into the Kingdom, an increase of 21 per cent year on last year.

The strengthening baht is not a threat to the tourism industry, Suraphon said. The number of tourist arrivals from the United States, Germany and France is on the rise, while those from Britain and Australia have declined slightly. It’s likely that they chose to go to other countries with weaker currencies for their travel.

Thanavath Phonvichai, director of the Economic and Business Forecasting Centre, said the blackout in the South would create only small business losses as it only lasted a few hours. Losses are estimated at Bt20 million to Bt50 million.

Businesses that would be hit hard are seafood processing, tourism and department stores. He said it should not have a huge impact on the business sector. However, as it occurred in the South, repeating an earlier similar incident on Koh Samui, it could have a psychological impact on investors.

“The government and responsible agencies need to announce that the repeated accident would not occur again and [that they] have clear prevention measures.

Otherwise, it would affect foreign-investor confidence in the Southern region in the future,” Thanavath said.

Pornsilp Patcha-rintanakul, vice chairman of the Thai Chamber of Commerce, called on the government to provide a prompt and clear explanation to the public, because blackouts in the South were a sensitive issue.

Federation of Thailand Industries secretary-general Thanit Sorat called for the government to ensure that similar events would not recur and said it had to find out which party would take responsibility in this case.

The FTI will confer on Monday on the estimated damage and what measures the government must launch to prevent the problem from happening again.

Surat Thani Chamber of Commerce chairman Suthat Lertmanorat said the blackout had hit businesses’ long-term confidence in the provincial power utilities. He is worried that such blackouts will recur, but added that the major industries in the province were not hit hard as they had backup power and the incident only lasted for a brief period.

Suthat also urged the government to devise a long-term solution to this problem.

Wannee Thaiphanit, president of the Pha-ngan Tourism Promotion Association, said the blackout had severely hurt the tourism industry. Fewer than half of the major hotels in Surat Thani province have power generators, while small restaurants were fully hit by the blackout.

She is also worried about the confidence of tourists, as Pha-ngan will hold a full-moon party this weekend during which around 20,000 tourists are expected to flock to the island.

Songkhla Chamber of Commerce chairman Somporn Siriporananont said the blackout was roughly estimated to cost the business sector in the province at least Bt500 million, as some major manufacturers’ production processes were disrupted.

Kritsana Iamwongnatee, chairman of the FTI’s Ranong Chapter, said the Electricity Generating Authority of Thailand and related agencies had to improve the electricity-transmission and backup systems to make them much more reliable.

He said the government should set up a centre to inform people of emergencies by mobile-phone text messages.

According to Airports of Thailand, Hat Yai and Phuket airports were not affected by the blackout because of their access to backup power. The state agency has ordered both airports to increase power reserves to enhance safety further.


Minister blames blackout on lightning strike
The Nation / Phuket Gazette
PHUKET: Energy Minister Pongsak Ruktapongpisal yesterday described Tuesday evening’s blackout in all 14 southern provinces as “unavoidable” but did not come up with long-term measures to prevent a repeat in the region.

The plan to build more power plants, including coal-fuelled plants, in the region is still on track, he said.

“I insist that the [blackout] problem has nothing to do with the policy of building a coal-fired power plant,” he said.

The plan has faced opposition from local residents and environmental activists.

Some academics and activists suspect that the blackout was a conspiracy aimed at stressing the need to construct more power plants in the South.

Assistant Professor Prasart Meetam of Prince of Songkla University’s Faculty of Sciences, warned the government against trying to use the blackout as an excuse to push ahead with the construction of more power plants.

“Various agencies have now given conflicting information, especially on power demand in the South,” he said.

Wichai Nakjon, an environmental activist from Krabi, said he suspected the power outage was a conspiracy aimed at pointing to the need for more power plants, particularly coal-fired ones.

In April, the energy minister had warned that there would be a widespread blackout because a natural gas facility in Myanmar that supplies Thailand’s power plants was under maintenance.

Pongsak blamed lightning striking a high-voltage transmission line that supplies power from the Central region to the South. There are two such lines but the other one was under maintenance.

In the short term, another line would be added linking the Ratchaburi power plant in the Central region to the South to prevent such a problem. He has ordered a study to expand the power distribution system in the South that was estimated to cost more than Bt10 billion.

“A cause of the problem is that power produced in the South does not meet local demand. And more elect