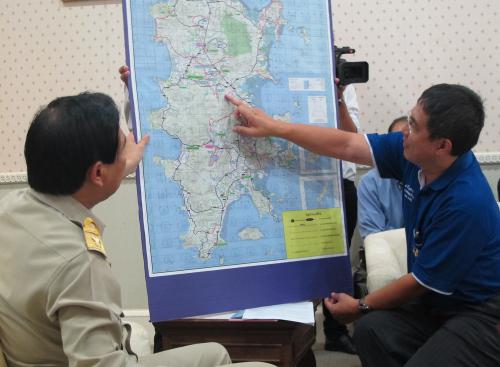 PHUKET: The local authorities responsible for main roads across Phuket will spend hundreds of millions of baht in road upgrades to make commuting in Phuket safer and faster.

The news was delivered by the chiefs of the Department of Rural Roads Phuket Office and the Phuket Highways Office at a meeting with Phuket Governor Maitri Inthusut at Provincial Hall this morning.

“The projects will use the budgets of fiscal 2014 and 2015,” Director Teeraporn explained.

“We will develop five alternative routes with the aim of reducing traffic congestion,” he added.

The first route to be upgraded will be the road joining Dowroong School on Chao Fa East Road to the intersection with Chao Fa West Road (map here), Director Teeraporn said.

Other roads to be upgraded are:

• Route 3001, which runs behind the Premium Outlet mall on the bypass road (map here)

“The total budget required is expected to be hundreds of millions of baht, and we expect the projects to be complete in 2015,” he added.

Governor Maitri said he would lead a team to inspect the sites of the proposed road upgrades so he could help expedite the budget required.

“My team and I will inspect the routes so we can see them for ourselves and determine which routes must be fixed urgently,” Governor Maitri said.

“We will request a special budget from the 2014 fiscal year for the routes that need to be fixed first. The rest of them can be fixed later, using the budget for 2015,” he added.

Director Teeraporn explained that all the roads slated for upgrades will have flood drains installed.

“Phuket has rain year-round and these routes may become the preferred roads for use in emergencies or when there are accidents on any of the main roads nearby,” he said.