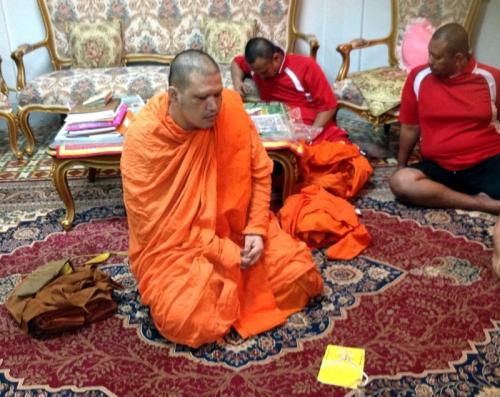 PHUKET: Four monks and a lay worker at the well-known Wat Kajornrungsan on Ranong Road in Phuket Town were arrested Tuesday night after a tip-off led police to catch them with drugs.

“We went to Wat Kajornrungsan after local residents reported to us that they suspected some monks were using drugs,” Phuket City Police Deputy Superintendent Prawit Engchuan told the Phuket Gazette.

Descriptions supplied by the residents helped police apprehend the men.

“As we arrived at the temple, we saw a monk in the temple hall who looked like a man described by residents. When he saw us, he started to run away, but we stopped him and searched him,” said Lt Col Prawit.

“We charged him with possession of a category 5 narcotic,” he said.

A monk sitting in front of his room also matched the description police were given.

“We searched the room of Santi Tuanthong, 32, and found 330 milligrams of ya ice [crystal methamphetamine]. We charged him with possession of a category 1 drug,” Col Prawit confirmed.

“Suchai Aungsanam, 32, was also in front of his room, but he went inside when he saw us. We searched him, found 1.21 grams of ya ice in his bag and charged him with possession of a category 1 drug too,” he added.

As police walked around the temple compound, they saw two men trying to avoid them. Searches revealed both were in possession of marijuana – Wichai Suksawat, 33, the last monk apprehended, had 1.78 grams, and Anun Hongyok, a 49-year-old temple employee, had 3.47 grams, Col Prawit said.

“We took the four monks to Wat Mongkol Nimit, where senior monks defrocked them,” he added.

After that, all five men were taken to Phuket City Police Station to be formally charged.