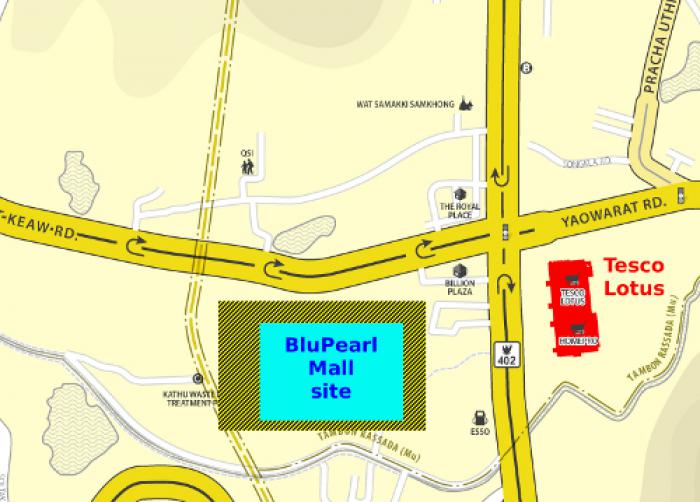 PHUKET: The Mall Group is set to invest 20 billion baht in the development of a 150 rai mega-project in Phuket’s Kathu district as part of an 80bn baht venture to open six world-class shopping centers in expectation of Thailand’s market flooding when the gates of the Asian Economic Community (AEC) open next year.

“It will be the pearl of Phuket, the pride of the Andaman. It will be a world-class luxury retail and entertainment resort destination in Asia, the same as The Palm is in Dubai.”

The recently announced expansion will form a major part of The Mall Group’s bid to cash in on the full implementation of the AEC next year, reported The Nation.

However, the BluPearl project, to be situated on Phra Phuket Kaew Road, isn’t slated to be finished until 2016.

“Thailand’s participation in the AEC in 2015 will herald a major change in the country’s position as a leading regional shopping hub and top tourist destination,” said Ms Supaluck.

“The improved infrastructure, transportation and airports in key cities is expected to increase inbound [Thai] tourism from 25mn to 40mn people within the next five years, with the key destination cities including Bangkok, Phuket, Pattaya, Hua Hin and Chiang Mai.”

“This will bolster economic growth in the area. Though I’ve yet to see the details, there is no doubt that it will be good for Phuket’s economy,” he told the Phuket Gazette.

Kathu District Chief Sayan Chanachaiwong was more reserved about the news of the mega-project landing in Phuket, withholding comment until he had an opportunity to learn more about it.

Phuket Provincial Chief Administrative Officer Watcharin Pathomwathanapong said the project would be good for Phuket as it would offer more shopping options for tourists and residents, but voiced his concern about possible traffic problems that might ensue.

The five mega-projects that will be soaking up the 60bn baht of the budget not being invested in Phuket are The Emporium, The EmQuartier, The Emsphere, BluPort and Bangkok Mall.

The District-Em will be a 650,000-square-meter retail center consisting of three world-class shopping complexes – The Emporium, The EmQuartier and The Emsphere – located on 50 rai adjacent to Benjasiri Park in Bangkok.

Another pivotal goal for The Mall Group is its flagship project, Bangkok Mall, to be located at the intersection of Bang Na-Trat and Sukhumvit roads on a plot of 100 rai across from the Bitec convention center in Bang Na.

The Mall Group will also be collaborating with Proud Real Estate by investing more than 5bn baht in BluPort, the first resort mall in Hua Hin. The project is set to be built on a 25-rai plot in the heart of Hua Hin, across from the InterContinental Hua Hin Resort.