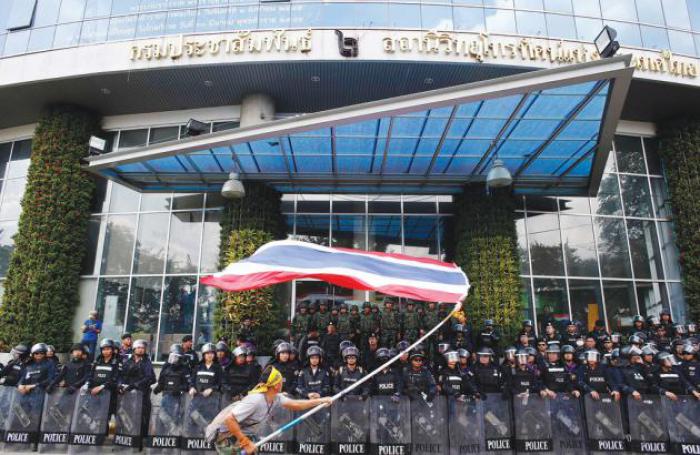 ‘Final fight’ to bring down govt
The Nation / Phuket Gazette

Protest leader Suthep Thaugsuban announced that the People’s Democratic Reform Committee (PDRC) aimed to change the government peacefully within three days. He told supporters this was possible “if we all cooperate. But if within three days we have not got rid of this regime, then we will do what is necessary.”

The government’s Centre for the Administration of Peace and Order (CAPO) warned of possible attacks at night against the protesters occupying the different locations.

“A group of people with ill intentions will attack those participating in the protests at different locations. The public are advised to use discretion when participating in such gatherings for your own safety,” CAPO said in a statement.

CAPO also threatened to take legal action against the executives of any TV stations that agreed to follow requests by the PDRC, such as broadcasting its statements or stopping broadcasts of CAPO announcements.

Suthep, who is the PDRC secretary-general, yesterday led a group of protesters to rally outside Government House, and he planned to stay there overnight in an attempt to force the Cabinet to resign.

He requested a meeting with Niwattumrong Boonsongpaisan, who became acting prime minister after the Constitutional Court ousted Yingluck Shinawatra on Wednesday for abuse of power in connection with the 2011 removal of National Security Council secretary-general Thawil Pliensri.

“If you find [Cabinet members], bring them to me. I wish to speak to them. I will be waiting at Government House,” Suthep said.

He also urged respectable people in the country, such as the Supreme Court president, the Senate Speaker and election commissioners, to hold discussions on a way out for the country.

“If you can’t find a solution in three days, I and my supporters will use our own ways to end this crisis,” he said.

Thousands of protesters from the PDRC and its allied groups gathered at the five major free-to-air TV stations – Channels 3, 5, 7, 9 and the National Broadcasting Services of Thailand – Government House, Parliament House, and CAPO headquarters.

The protesters called on the TV stations to broadcast statements from the PDRC, not to broadcast messages from the government or CAPO, and allow them to stay at the stations for three to five days. Channels 3, 5, 7 and 9 later agreed to the PDRC’s requests, according to Satit Wongnongtaey, who is a PDRC leader. In response, the Thai Journalists Association and the Thai Broadcast Journalists Association issued a joint statement calling on the PDRC to vacate the stations and stop pressuring staff.

Suthep earlier yesterday issued this message to the TV stations during his rally address: “We ask you to stop broadcasting news of this dictatorial government. We won’t interfere with your normal schedule, but when we need to broadcast statements, we want you to cooperate.” At Parliament House, Suthep met with Deputy Senate Speaker Surachai Liangboonlert-chai, in his capacity as the acting Speaker, and asked him and other senators to help find a “solution” for the country.

Surachai said before meeting with Suthep he would speak with independent agencies in a bid to settle the political crisis. He said the Senate might need to discuss the matter informally.

Meanwhile, red-shirt supporters of the ruling Pheu Thai Party were preparing for a large rally starting today in support of the government.

Red-shirt leader Kwanchai Praipana said he would lead more than 1,000 people from the Northeast to join the rally on Aksa Road in Nakhon Pathom province.

“We are angry and we are ready to fight,” he said.

Democrat Party leader Abhisit Vejjajiva expressed concern that the confrontation between the pro- and anti-government groups could lead to violence. He added, however, that the government was incapable of dealing with the problem – pointing to recent bomb attacks targeting many locations, including the house of a Constitutional Court judge who ruled against Yingluck.

Red shirts will meet today at Aksa Road in Nakhon Pathom in what is expected to be a mass gathering.

Provincial red-shirt leaders said they would resort to all means possible to defend the administration.

Udon Thani red-shirt leader Kwanchai Praipana said 1,000 red shirts from Udon Thani with 100 trained red guards from the Democracy Protection Volunteers would come to Aksa Road. The protesters would stay till Wednesday and would not march anywhere.

Apichart Inson (aka DJ Uan), a leader of the red shirt’s Rak Chiang Mai 51, said red shirts from the North were mobilising in tandem with red shirts in other provinces and had gathered at provincial halls including at Lampang and Kamphaeng Phet to burn coffins.

He said letters of protest were sent to provincial governors to show the world that the red shirts rejected the court’s ruling against the prime minister, who was elected by millions and that people shall rise to fight for a just society.

“Chiang Mai red shirts have joined reds from Kamphaeng Phet It doesn’t matter which group or which province we’re from We shall fight together,” he added.

Apichart claimed that a million red shirts were expected to converge at Aksa Road today and people would see if there were more reds or more supporters of the anti-government People’s Democratic Reform Committee (PDRC).

He said PDRC leader Suthep Thaugsuban had said earlier that the side with the smaller number of supporters would retreat.

In Khon Kaen, some 50 red shirts gathered to burn coffins with pictures of the Constitutional Court judges attached.

PHUKET: Police fired tear gas and sprayed a water cannon at monk Phra Buddha Issara, a leader of the anti-government People’s Democratic Reform Committee (PDRC), and his followers yesterday after they tried to trespass into the Centre for the Administration of Peace and Order (CAPO).

The monk, in response, vowed to file three complaints at Thung Song Hong police station today against officers for attempted murder, violating his constitutional rights to freedom of assembly, and “unjustly” carrying out their duty.

Rights groups call for US sanctions against Thailand over trafficking