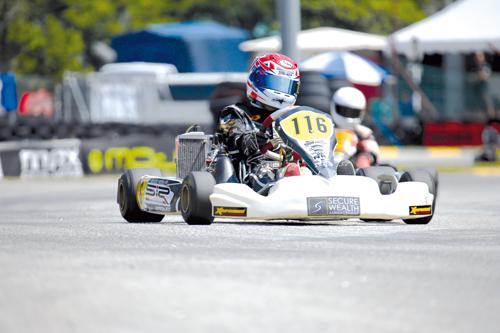 At round two of the Thai Championship in Saraburi, Ben qualified fourth with Sam coming in seventh. An erratic race in Heat 1 caused Ben to finish fifth, followed by Sam maintaining his seventh place from the grid.

Ben improved in Heat 2 finishing fourth with Sam again in seventh. The boys suffered mixed fortunes in the final heat of the day; Ben improved on his fourth place finish, finishing third but Sam failed to finish due to a puncture.

The boys were in a field of 28 racers at round three of the AMC at the Elite Speedway in Kuala Lumpur, but they struggled to break into the top 10. Ben’s highest finish was 11th place in Heat 1 and for Sam it was 18th in the pre-final.

Back to Saraburi for round three of the Thai Championship, Ben showed strong driving skills in Heat 1 and 2, finishing second. In the final, Ben encountered some problems at the start and dropped from second place to be seven seconds behind the leaders in last place. He managed to fight back and finished a respectable fourth, only 1.7 seconds behind the leader. Sam finished seventh in the final losing out on sixth place in the final stages of the race.

Round four of AMC put the boys from Phuket in a field of 31 racers at the Elite Speedway.

Ben was forced to avoid another driver at the start of Heat 1, which dropped him to the back of the pack. He managed to battle his way to a 15th place finish. Sam’s radiator and spark plugs were damaged in a collision with another driver and he was forced to retire. In the final, Ben was in seventh after the first lap, but a mistake prone drive, and engine problems, found him in a disappointing 15th place at the end of the race. Sam finished a credible 18th and set a faster lap time than Ben.