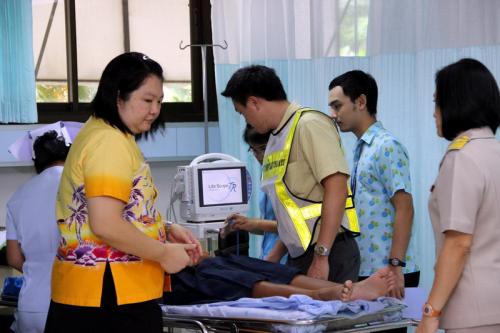 PHUKET: Nearly two dozen Phuket students were rushed to Patong Hospital this morning after they collapsed screaming and convulsing during morning assembly – three out of the nine students who were administered anesthesia by doctors at the hospital remain there.

According to reports, the culprit seems to be a ghost in the tourist haven Khao Lak who was offended by a girl putting her sarong in an “inappropriate place”.

The students, 21 girls and one boy between 13 and 15 years old, collapsed into their screaming frenzy while at morning assembly at Wat Suwan Khiri Wong School (Wat Patong School – map here) at about 8:20am.

A teacher at the school who declined to be named told the Phuket Gazette that all of the students affected were taken to Khao Lak on a Scouts camping trip on Friday.

“While we were on the camping trip, one of the girls hung her sarong in an inappropriate place,” he said, declining to be more specific about where the sarong was placed.

“Later, other students reported seeing what seemed to be a woman sitting on that girl’s shoulders.”

“While we were in Khao Lak, I even had a dream in which a voice told me to take the girl back to where she hung her sarong and apologize,” said the teacher.

“But I ignored the dream. It didn’t make sense… Then this happened this morning,” the teacher said.

Dr Sirichai Silapa-archa, director of Patong Hospital, told the Gazette, “They were all in shock. They were hyperventilating, so we calmed them down and aided in slowing their breathing.”

Thirteen of the students were released from the hospital before lunch, but the other nine were still screaming and convulsing, he said.

“We had to put them under general anesthesia so they could sleep and recover while they were unconscious,” said Dr Sirichai.

After the nine children woke, doctors discharged six of them this afternoon, but are keeping three of them at the hospital under observation.

“They are still very weak. We have them on saline drips, and expect to discharge them tomorrow morning,” he added.

School director Pratheep Musikaeow this afternoon was unavailable for comment.

The Gazette has yet to determine whether or not school authorities will question students to determine if the incident this morning was a genuine case of simultaneous mass possession or a hoax.