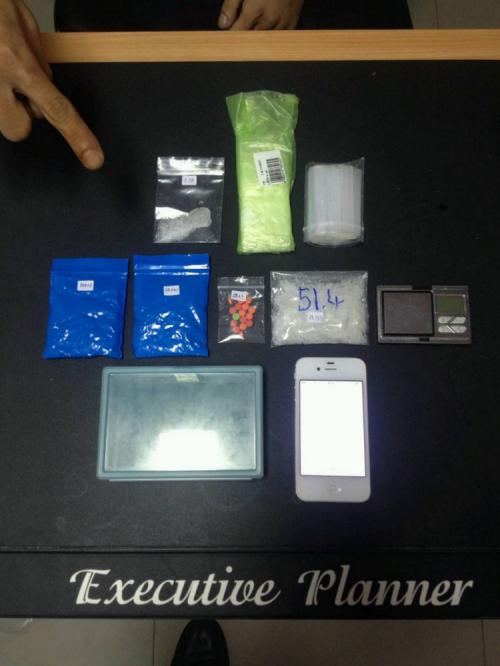 PHUKET: Police yesterday arrested a man at a Phuket Town hotel found in possession of drugs with a street value of more than 200,000 baht.

Acting on a tip-off, officers raided a room at the Sunanta mansion on Sakdidet Road (map here).

“We were informed by undercover police that this man was selling drugs to teenagers in the area,” said Lt Col Jarun Bangprasert of the Phuket Provincial Police.

Officers asked hotel staff to open the room, where they found Autthapon Somboonprom, 30, in possession of 338 pills of ya bah (methamphetamine) and 65.65 grams of ya ice (crystal methamphetamine).

“The drugs were on a tray in the wardrobe. We also seized an electronic scale and an iPhone 5,” Col Jarun said.

Mr Autthapon confessed to the charge of possession of a Category 1 drug with intent to sell.

“I bought the drugs from a dealer who goes by the names Choei or Tle. The last time was on January 16, when I bought 50 grams of ya ice and 500 pills of ya bah,” Mr Autthapon said.

Mr Autthapon’s arrest on Wednesday followed the Tuesday arrest of a man in Rassada for possession of 40 pills of ya bah and a handmade gun with ammunition.

“He seemed drunk, so officers asked to search him. Then he tried to run away,” he said.

Police found 20 pills of ya bah in a plastic bag in his pants, and another 20 pills at his rented home in Rassada.

“We also found a handmade gun and two shotgun cartridges inside a cupboard in a bedroom upstairs,” Lt Col Prawit said.

“He confessed to the charges,” Col Prawit said.