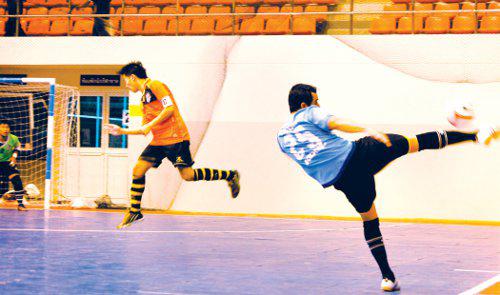 PHUKET: Due to the ongoing social-political unrest in the Kingdom’s capital, the Futsal Thailand Premier League (FTPL) 2014 season’s planned January 25 kickoff has been postponed.

It is now hoped that the season-opener will commence in February, an administrator of the island’s pro five-a-side footy club Phuket United said.

“The [season] start was postponed due to the political [unrest]. The season should start around February 8, but we have to monitor the situation closely,” he said.

Asked about this year’s lineup, the coordinator confirmed that the club will have at least two foreign players in addition to a dozen confirmed Thai players.

The news of Santos’ surprise re-signing comes to the delight of the Andaman Pearls’ 3,000-plus fan-base, who were initially disappointed after it was announced back in November that the club was not planning to re-sign the skilled Brazilian due to budget constraints.

Santos, whose wife recently gave birth to a healthy baby girl, told the Gazette that he is very excited to return to Phuket this season, and will arrive back to the island for training tomorrow, Friday, January 24.

Unfortunately, Phuket United’s other two Brazilian players from last season, Marcos and Jardel will not be returning to the club; Marcos was reported to have signed with Si Saket, while Jardel’s Brazilian club, Ampére Futsal reportedly would not release him for loan to Phuket this season.

Looking ahead to their second season in Thailand’s top futsal ranks, Phuket United are one of 12 teams to have confirmed their readiness to compete in the 2014 FTPL, sponsored by Siam Multimedia Co Ltd.

Clubs that did not confirm readiness for the 2014 FTPL include Leo Bang Seu, Lampang United, Samut Prakarn and Surat Thani FC – whose places will be substituted by four new clubs: Chiang Mai, Pattaya Arena, Khon Kaen and Uthaithani.

The former four clubs will have the option to reinstate their right to compete in the 2015 season.

Keep checking the Gazette for regular updates about Phuket United and the FTPL 2014 season.