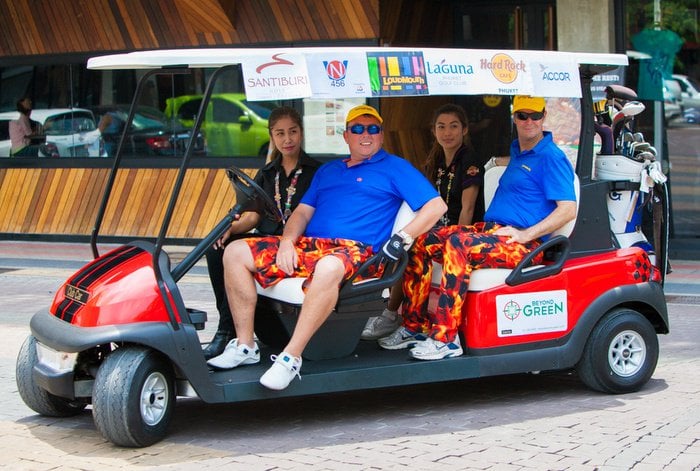 PHUKET: Graham Haslam and Mark Cameron have already raised more than 1 million baht for a local charity without having driven their electric golf cart a single meter in a Guinness World Record attempt.

Dubbed “The Longest Drive” the duo plan to drive the golf cart from Pattaya to Phuket, about 1,400km, as the raise funds for the Phuket Has Been Good To Us charity. The latest financial push for their effort came from Asian Seniors Tour.

“I have known and supported Phuket Has Been Good To Us for many years. When I read about this world record attempt by Graham and Mark I had to be part of it. I just wish I was joining them!” said Chuan Campbell, organizer of the Asian Seniors Tour. “This is yet another great fund-raising idea that these two have come up with, and I am pleased that we at Asian Seniors Tour are able to support them.”

“We have had that golf cart for almost 18 months and I am very impressed seeing what it was capable of,” said the owner of the vehicle, David Westrick of Golf Cart Thailand.

The Longest Drive will commence on March 8 as the Mr Haslam and Mr Cameron depart from Hard Rock Cafe Pattaya, with eyes set on arriving at Hard Rock Cafe Phuket 24 days later.