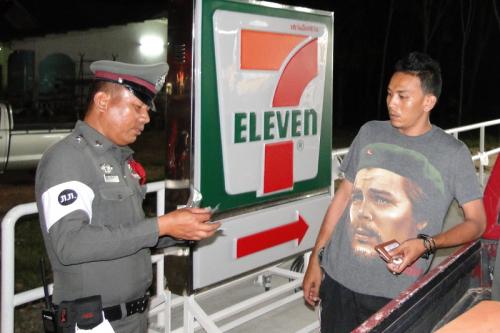 PHUKET: Thalang Police arrested a national defense volunteer with two bags of marijuana at a checkpoint in Thalang on Saturday.

When police saw a white Toyota Vios attempting to avoid the checkpoint at Baan Yamu at 8:30pm, they stopped the car, driven by Supakij Benjamas, 29, and searched it.

“We found two bags of marijuana and tobacco in a peanut can in the car,” Thalang Police Deputy Superintendent Amnuay Kraiwutthianun said.

“The value of the marijuana was 2,000 baht and Mr Supakij was charged with possession and use of a class 5 narcotic,” said Col Amnuay. “The maximum penalty is up to five years in prison or a 50,000 baht fine.”

“We are continuing the investigation to verify if there are any other people involved in this case,” he said.

The checkpoint at Baan Yamu on Saturday was part of an initiative organized by Phuket Provincial Police Commander Choti Chavalviwat to crack down on drugs and weapons in Phuket.