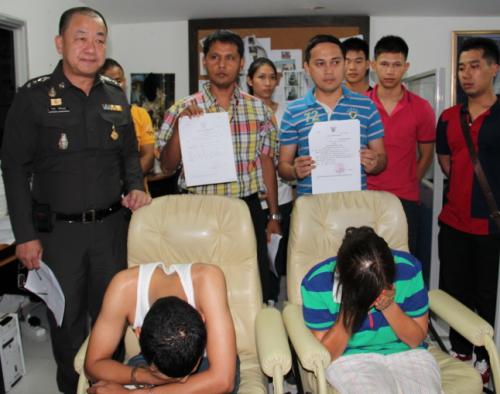 Acting on reports from two men who said they had been scammed out of 200,000 and 900,000 baht, police arrested Wasan Choothong, 29, and Tiwalai Ruprasut,58, at the entrance of Bangla Road in Patong (map here).

Both had outstanding arrest warrants for fraud.

“The suspects told police that they had conducted many scams,” said Patong Police Superintendent Chiraphat Pochanaphan. “They said the total amount they had made through these scams was over 16 million baht.”

The scam was simple, Col Chiraphat said: Mr Wasan and Mrs Tiwalai posed as real estate agents and approached people trying to sell some land or a house, offering to arrange a meeting with a rich prospective buyer. There would be a long wait for the buyer to arrive, during which the victims would be invited to gamble to kill time. Associates of the scammers would be called in to participate in a rigged game of fantan, which is a traditional Chinese game of chance.

“The next thing the victims knew, was that they were broke,” said Patong Police Deputy Superintendent Paisarn Sangthep.

“People who put up property for sale signs may be targeted by the gang. They will call you and pretend to be interested in buying your property, then they will trick you into gambling. Please be extra careful,” he said.

The Patong Police are preparing to transfer the two con artists to other jurisdictions for prosecution.