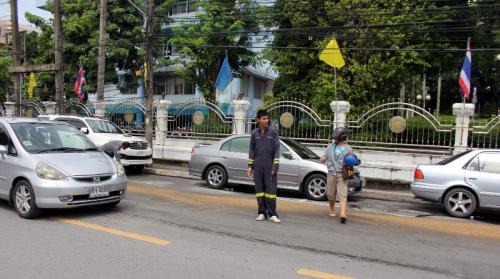 PHUKET: A six-wheeled gasoline tanker truck leaked a trail of fuel 2.5 kilometers long through Phuket Town yesterday, causing motorbikes to skid and fall, resulting in at least one hospitalization.

Police responded to a report at 11am that a gas tanker had leaked “gasoline” along Yaowarat Road, from the intersection with Mae Luan Road (map here) all the way to the entrance to Bangkok Hospital Phuket (map here).

Phuket City Traffic Police and Disaster Prevention and Mitigation officials followed the trail and found 41-year-old Rattanapon Kittitaraphon on the ground in front of Vachira Phuket Hospital with a leg injury.

“I was riding with my two sons. I was totally unaware of the fuel spill and suddenly my bike slid out from under me,” Ms Rattanapon said.

“I hurt my leg, but luckily neither of my sons was hurt. They went directly to Vachira Hospital and got help for me,” she added.

Before Vachira Hospital staff wheeled her into the hospital for treatment, an angry Ms Rattanapon said, “I want the truck company that caused this to take responsibility. If you spill gas on the road, you have to take care of it. A lot of other motorcyclists crashed too.”

Phuket City Disaster Prevention and Mitigation officials said they believe the fuel spilled from the tanker truck’s own gas tanks, not from the huge tank it was hauling.

“A pump attendant must have forgotten to put the gas cap back on, allowing the fuel to spill onto the road while he was driving,” one official said.