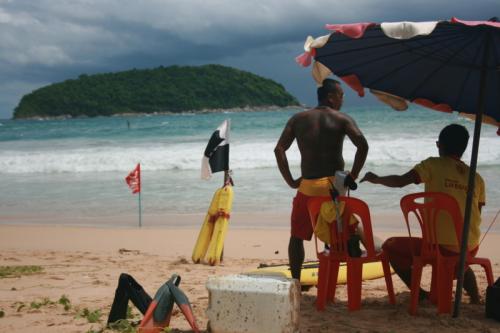 PHUKET: Lifeguards are staying on Phuket’s key tourist beaches for another month, as the Phuket Provincial Administrative Organization (PPAO) wades through the Phuket Lifeguard Club’s contract again this year, beginning yet another saga (story here).

To ensure the safety of tourists and residents at the approach of monsoon weather – often the cause of dangerous swimming conditions – the PPAO and Phuket Lifeguard Club have agreed to have the club’s contract extended to July 27, 2013.

“We were contacted by the PPAO last week about extending the contract for one more month,” Phuket Lifeguard Club President Prathaiyut “Nut” Chuayuan told the Phuket Gazette today. “We don’t know if a new contract is being drafted or what the details of any new contract will be.”

“However, we do expect an increase in the budget,” Mr Prathaiyut said.

The expected increase comes as the PPAO moves ahead with the plan of increasing the number of lifeguard stations from 33 to 38 (story here).

“I don’t want to reveal any information in regards to the new contract at this moment because we are still in the process of getting it ready,” PPAO Tourism Department Chief Juthaphon Thongcharoen said.