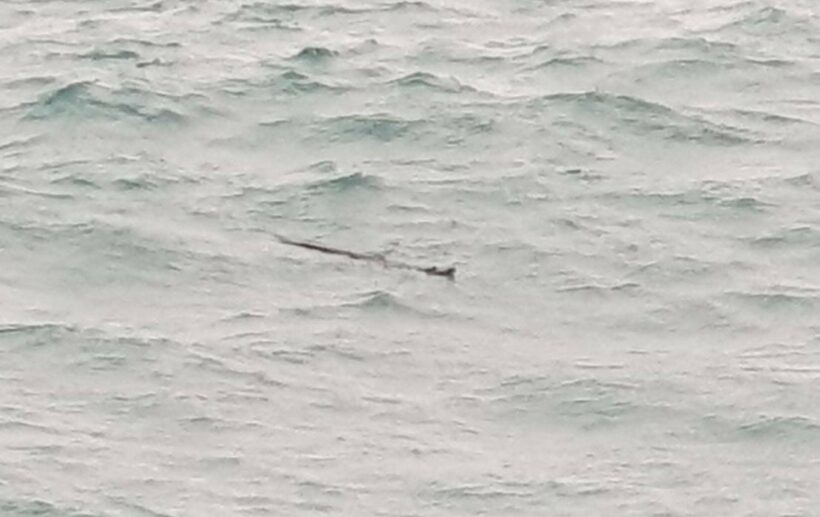 Something officials are describing as a ‘crocodile’ was spotted off the coast at Yanui Beach, just south of Nai Harn beach, yesterday. The witness who first saw it claims the crocodile was chasing him but that he managed to escape.

Chalong Police were notified of the incident around 4.30pm. Officers from the Marine Endangered Species Unit at the Phuket Marine Biological Centre (PMBC) were called to the beach to investigate the claims.

30 metres from the shore they could see something similar to a crocodile bobbing up and down in the water. Tourists had already heeded the warnings and gotten out of the water. It later disappeared but locals have recorded a video of it.

It hasn’t yet been confirmed as a crocodile by experts. However, whatever it was, was reported to be about 1.2 metres long.

Chartchai Hansut, the first person who spotted the creature said, “On Tuesday night (July 17) while I was throwing a fishing net to catch some fish, I spotted this animal with red eyes. Later it disappeared.”

“At 3am, Wednesday morning, while I was walking into the water the ‘crocodile’ rushed at me so fast. I immediately escaped back to the shore. The ‘crocodile’ stopped on the shoreline and didn’t come any further. I used the torch to see and it was a crocodile but later it headed back into the sea.”

“I was waiting at the beach until morning (July 18) and told the local lifeguards.

Officers from the Phuket Fisheries Officers and lifeguards at Yanui and Nai Harn Beaches are patrolling and warning beachgoers.

A Rawai local who visits Nai Harn beach each morning contacted The Thaiger this morning to tell us that he was going for a swim at Nai Harn beach today and was warned not to go swimming by officials from the Rawai OrBorTor.