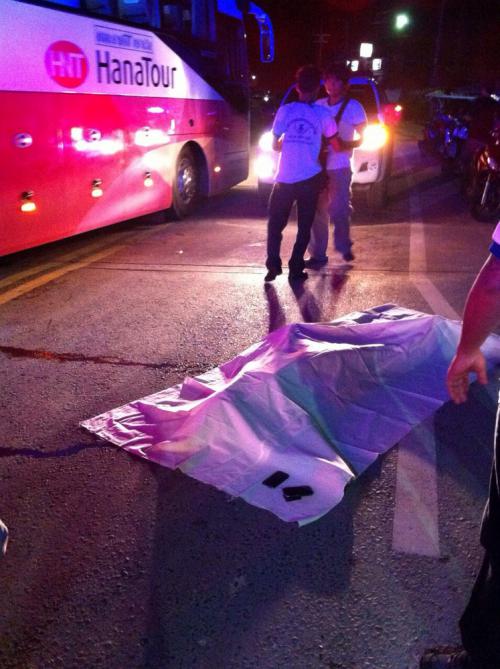 PHUKET: Police suspect that alcohol played a critical role in the death of a 27-year-old woman who was in a head-on accident near the Thung Thong Police checkpoint early Saturday morning.

Kamontip Seangkuenun was found dead at the scene – the divided road near the entrance to Soi Bangthong (map here) – at about 3:15am.

Ms Kamontip slammed head-on into a tour van that had dropped tourists off in Kamala, said Capt Wattanathorn Bumroongtin of the Thung Thong Police.

“Ms Kamontip was riding with a friend who was on another motorbike. They had been out drinking in Phuket Town and were on their way to visit Ms Kamontip’s sister in Patong,” Capt Wattanathorn said.

The van driver was taken to Thung Thong Police Station for questioning.

“The driver was not charged, as Ms Kamontip was clearly riding on the wrong side of the road,” Capt Wattanathorn said.

“The driver said he saw Ms Kamontip too late to avoid the accident because that section of the road was very dark,” he added.

Ms Kamontip’s friend said she had no idea why Ms Kamontip was riding on the wrong side of the divided road.

“She was riding behind me, and the next thing I saw was the van hitting her,” she sobbed.

Capt Wattanathorn explained that officers had Ms Kamontip’s body taken to Vachira Phuket Hospital to establish her blood-alcohol concentration at the time of her death.