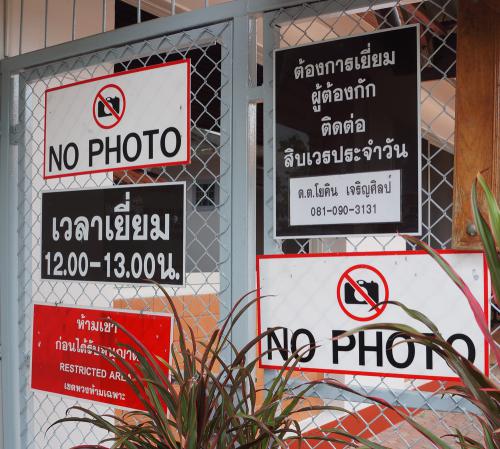 PHUKET: The American arrested in Phuket for the alleged sexual assault of a 13-year-old girl in Harris County, Texas, was due to fly home on Wednesday.

“I came here for a vacation,” 41-year-old Forrest Wayne told the Phuket Gazette today from his holding cell at Phuket Immigration (map here).

Mr Wayne entered Thailand on November 1, three days prior to the warrant for the fitness instructor’s arrest being issued by the Harris County Court.

Mr Wayne told the Gazette that up until the point of being arrested, he planned on catching his pre-booked return flight.

In a public statement issued last Wednesday, the Houston Police said that Mr Wayne befriended the 13-year-old female victim in July while he was working as a fitness instructor.

“He used text messages and phone calls to start a relationship with the girl. That relationship led to Wayne engaging in multiple sexual encounters with the victim at a hotel,” the statement read (story here).

When the Gazette visited Mr Wayne this afternoon, he was waiting for US Embassy officials to arrive from Bangkok.

“Are you here for me?” he asked. “Do you know when the US Embassy will be here?”

Phuket Immigration Superintendent Sunchai Chokkajaykij replied, “The US Embassy has contacted me. They said they are looking to send someone to pick you up.”

“Sorry, we do not know. They are making preparations,” Col Sunchai said.

Mr Wayne acknowledged he was aware of the charge against him: “Yes, I do [understand].”

However, he declined to comment any further than: “I was accused.”

Asked if he would like the Gazette to pass on any message to the US Embassy, he replied, “Come and get me. I want to go home.”