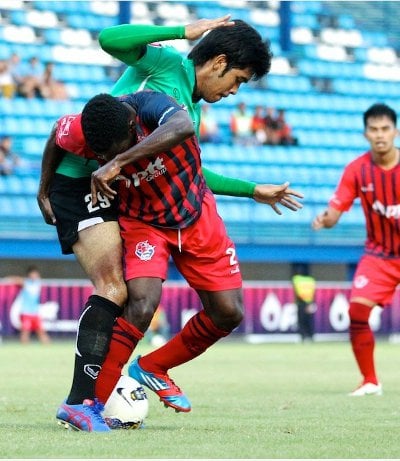 PHUKET: A single goal was all that PTT Rayong FC needed to prevail over Phuket FC on Saturday night at Surakul Stadium in Phuket Town.

It was the second time the two sides met this season; exactly two weeks earlier Phuket endured a 6-0 thrashing at Rayong. It was the last straw for former coach Milos Josic of Serbia, who resigned after the match.

Freshly reinforced with a new coach, new players and home field advantage, the Islanders came into the match more confident and better prepared; five of their seven recent new signings were in the starting 11. These included defenders Wanmai Setthanan and Nonthaphon Jiensathawong, midfielders Roland Vargas and Yutthana Jongnok as well as Thai keeper Kampol Pathom-attakul, making his debut with Phuket and giving star Brazilian keeper Alonso Goleiro a break.

As expected, PTT started with sustained attacking football, but there was a noticeable difference on the Phuket side compared to the first meeting; the defense marked attackers and closed spaces more efficiently. Indeed, the Islanders’ midfield game appeared to have improved dramatically.

However, the PTT “Fire Power” were clearly the stronger team, with Slovenian midfielder Jozef Tirer and Cameroonian defender Ebako Merlin providing little opportunity for the home side to gain any advantage, commanding possession and marking their opposition closely.

The evening’s only goal came from Rayong’s leading scorer, Naret Kabkrikeaw, who in the final minute of the first half drove in his ninth of the season.

The play was set up from a piercing drive by speedy Ivorian Amadou Ouattara, who stretched Phuket’s final defenses thin by diverting his drive and sending the ball to Decha Sangdi, unmarked on the deep left wing.

Decha’s subsequent switch cross hit its mark near the far post, where Naret was perfectly positioned to send the shot home and silence most of the crowd of 2,200, apart from a small but highly-vocal group of PTT Rayong supporters.

The second half saw some strategic changes for Phuket.

Kampol, who suffered a minor injury during play, was replaced by reserve keeper Pirachat Yimthong.

Meanwhile, Santos and Klaithin were replaced by Ivorian Ibrahim Kanoute and Korean Seongwon Byeon as Phuket picked tried to press the attack and score an equalizer.

But even through five minutes of injury time, PTT’s defenses remained impenetrable.

The result sees Rayong move up two spots into fourth place, while Phuket fell two spots into 15th place – back into the dreaded five-team relegation zone.

Other results over the weekend:

Phuket’s next match will be an away fixture on Sunday against 3rd placed Krabi FC, who beat Phuket 1-0 at Surakul Stadium on July 7.

Kickoff for the match at Krabi Central Stadium will be at 6pm.