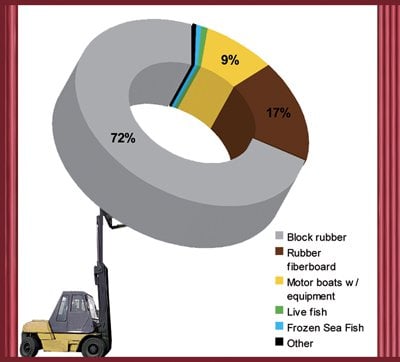 Meanwhile, the combined value of imports is up to 1.67bn baht, compared to last year’s full-year total of 2.12bn baht.

With three months still to go before the fiscal books are finalized, the island’s trade surplus of exports over imports – 10.39bn baht – has already surpassed last year’s full-year figure of 10.38bn baht.

Indeed, the prospects for another record breaking year in trade in Phuket is looking bright, with the total value of trade – the sum of exports and imports – now clearing 13.7bn baht, and looking likely to surmount last year’s full-year figure of 14.6bn baht.

To nobody’s surprise, the island’s top export this year, by far, has been block rubber, with exports of the commodity currently valued at 8.6bn baht.

Topping the list of the island’s imports, by value, is cargo vessels, worth a total of 545mn baht. This is followed by chilled sea fish (466mn baht), sports and leisure vessels (443mn baht), frozen sea fish (149mn baht) and boiler components (40mn baht).

Revenue collected by Customs from trade so far this year is just over 36mn baht.