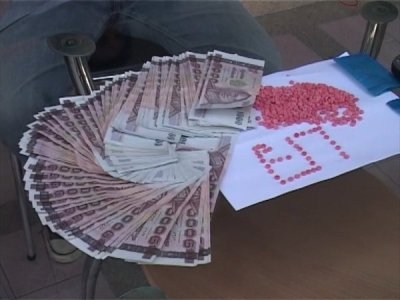 PATONG, PHUKET: The arrest of a volunteer soldier on drug charges on Wednesday may indicate the price of ya bah (methamphetamine) is falling on the island.

Kathu Police arrested Sornchai Nop in his room at a small hotel on Ratchaprasong Road in Patong at about 2am.

Mr Sornchai, an army scout based in Narathiwat, apparently found selling ya bah in Phuket more lucrative than battling insurgents in the Deep South.

The arrest, which followed two-weeks of surveillance, ended in a sting operation with undercover police posing as buyers.

Further investigation led by Kathu Police Superintendent Arayapan Pukbuakao revealed that Mr Sornchai had been selling ya bah in Patong ‘for a long time’ to clients including bar girls and tourists.

Mr Sornchai, 29, confessed to charges of possession of a Class 1 narcotic with intent to sell.

He told police he bought the pills in Nakhon Sri Thammarat for 130 baht each and sold them in Patong for about 200 baht each.

The sale price is the lowest reported in the local media in recent years.