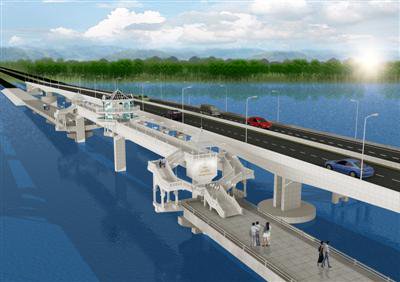 MAI KHAO, PHUKET: The construction firm building a new bridge to Phuket has released computer generated images of what the project will look like upon completion.

Project engineer Dr Phattanapong Thonsuk of project contractor Italian-Thai Development Co said the old Sarasin Bridge has suffered from years of saltwater corrosion and wear and is being replaced following concerns by the Highway Department about its structural integrity.

The original bridge, completed in 1967, was named after Pote Sarasin, who served as head of the now-defunct National Development Ministry.

Construction conglomerate Italian-Thai built not only the original Sarasin Bridge, but also its sister span the Thepkrasattri Bridge.

For the original report about the project click here.

Although the official name of the project is ‘Sarasin 2,’ the replacement bridge will likely get a new name.

The name will possibly be decided through a public vote like the baby panda ‘Lin Hui’ born in Chiang Mai last year, Dr Phattanapong said.

The name would once again ‘pair’ the two heroines by having one bridge named after each, he said.

Ya bah going cheap in Phuket