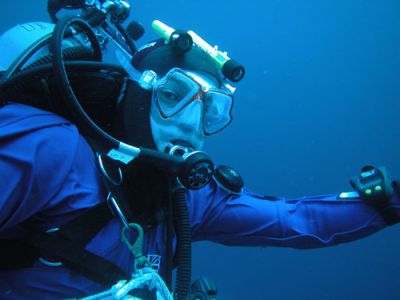 ANDAMAN SEA: Briton Mark Ellyatt has set a new world record of 313 meters for the deepest solo scuba dive, beating the previous record by five meters. Describing his historic dive on Thursday, in waters four hours off Patong, Mr Ellyatt said, “It’s a lonely trip, like a trip to the Moon.” The descent into the depths took a mere 12 minutes and Mr Ellyat spent just 60 seconds there, collecting a marker to verify his record-breaking depth. But the ascent took six hours and 40 minutes. He dove with six tanks to begin with and had another 24 brought down to him by support divers who met him at various depths on his way back up. Mr Ellyatt told the Gazette that success lay not just in reaching the record depth but in coming back up safely. “Other dives like this that have been attempted ended with massive injuries to the diver,” he explained. In February this year Mr Ellyatt himself needed emergency decompression treatment after a deep dive. He spent more than three months recovering. He said that he himself had devised the decompression tables needed to ascend safely from great depth, and had made sure that they were reliable before attempting the real thing. When asked how long he had been preparing for this deep dive Mr Ellyatt said with a laugh, “About 10 years.” He told the Gazette that his main motive, however, was not to break the world record, but to improve safety standards. “I wanted to find a method for safely ascending because there didn’t seem to be one. Lots of companies sell computer software that plots a solution for returning to the surface, but none of it seems to work,” he said. Mr Ellyatt, the Technical Instructor Trainer at dive company Scuba Cat, celebrated yesterday’s achievement safely back on terra firma, watching a taped video of his deep water diving success.

Paradorn goes down in straight sets