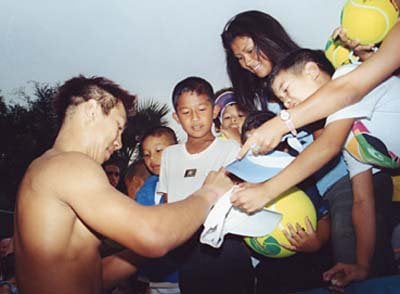 CHERNG TALAY: In the final day of play in the Paradorn Super Tour 2003 held at Laguna Beach Resort yesterday afternoon, Chilean Marcelo Rios swept aside Paradorn Srichaphan in straight sets, 6-4; 6-4, causing the Thai tennis superstar to end up winless in the four-city exhibition tournament bearing his name. Playing on a synthetic grass surface in front of a standing-room-only crowd, the Chilean former world No 1 broke the Thai tennis star in the sixth game of the first set to go up 4-2 after some sloppy play at the net by Paradorn. Rios sailed through his next service game to go up 5-2, but Paradorn battled back with with successive wins, breaking back in the ninth game to pull to within 5-4. But in the next game Rios returned the favor, breaking back to close out the set 6-4. The second set stayed on serve through the first nine games with some scintillating play that featured numerous drop shots and a spectacular between-the-legs return from the baseline by Paradorn. The improbable return took Rios by surprise and Paradorn went on to win the point and later pull even at 4-4. Ahead 5-4, the Chilean again broke the Thai heartthrob to take the match 2-0. After Paradorn’s match and some light drizzle, more than half of the crowd departed, passing up a chance to watch Thailand’s ladies’ number one Tamarine Tanasugarn take on doll-faced Taiwanese star Chuang Chia-Jung in a baseline battle that saw the Thai pull off a straight sets victory 7-5; 6-4. Californian Talyor Dent, who went undefeated in the tour and twice defeated Paradorn in straight sets, was presented with a trophy by Laguna Resorts and Hotels Managing Director James Batt. In a laid-back press conference after the day’s play, Dent jokingly thanked Paradorn for “putting up with him” over the past 10 days, adding that he hoped to trim down to 89 kilos from his current weight of 95. “I was like a snail out there,” he said, “I want to be quick like these guys,” he added, pointing at Paradorn and Rios. When asked what the key was to his impressive performance, the 22-year-old said, “It’s so much fun playing here. I really enjoyed myself, and when a player is enjoying himself that’s when he plays his best tennis.” Paradorn admitted that his performance had been sub-par, adding that a nagging shoulder injury had hampered his play somewhat. He confirmed that there would be another Paradorn Super Tour in 2004, but said it was too early to confirm if Phuket would be one of the venues.

Gov vows to get rid of jet-skis