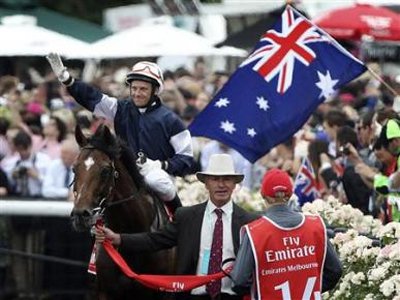 PHUKET: Green Moon thundered down the straight to win the A$6.2 million (192 million baht) Melbourne Cup today, upsetting a host of highly-fancied foreign entrants to bring Australia’s most coveted racing prize back into local hands.

The Robert Hickmott-trained stallion charged to the front with 300 meters to the line and held off fast-finishing runner-up Fiorente to win the two-mile handicap by a length, with third-placed Jakkalberry a further length-and-a-quarter back.

It is the first win for a locally prepared horse since Shocking won “the race that stops a nation” in 2009.

Jockey Brett Prebble, who rode the 22-1 shot to perfection, punched the air in celebration as a packed crowd at Flemington Racecourse roared, and shook hands with Britain’s Prince Charles in the crowd.

Prebble said he knew the six-year-old bay had the race won at the 1,200 meter mark.

“I knew nothing was going to go with him if he sustained the journey,” he said in a television interview.

“I probably pressed him a bit soon and it’s hard to wait when you have so much power underneath you but I was very confident that no-one would pick him up when I let him down and he ran all the way through the wire.

“It was a great feeling.”