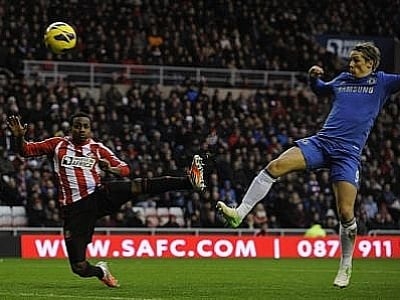 The much-maligned Spain forward struck two goals in the first half, his second from the penalty spot, and almost completed a hat-trick shortly after halftime when his ferocious shot rebounded off the woodwork for compatriot Juan Mata to tap home.

The double by Torres, his first goals in the Premier League for two months, came on the back of his double blast in Wednesday’s 6-1 rout of Danish team Nordsjaelland in the Champions League.

“Torres was always around but we needed to create more chances for him because he will always score goals,” Benitez told Sky Sports.

The former Liverpool manager, who took charge at Chelsea on an interim basis when Roberto Di Matteo was sacked last month, now takes the European champions to Japan where they will meet Mexicans Monterrey or Ulsan Hyundai of South Korea in Thursday’s World Club Cup semi-finals.

Bottom club Queens Park Rangers (QPR) set an unwanted Premier League record when a 2-2 draw at Wigan Athletic meant they had failed to win any of their 16 matches this season.

Norwich City are unbeaten in 10 matches in all competitions after a 4-3 win at Swansea City, although Michu’s double for the home team after the break almost helped them to an unlikely escape, having trailed 3-0 at halftime.

Southampton climbed out of the relegation zone, above Sunderland, with a 1-0 defeat of second-bottom Reading while Aston Villa and Stoke City produced a dull 0-0 draw.
Leaders Manchester United face champions Manchester City on Sunday protecting a three-point advantage over their neighbours.

A return of four goals in two matches for Torres appears to show the player, known as ‘El Nino’ in his early days at Atletico Madrid, has rediscovered his confidence.

He struck in the 11th minute at Sunderland with a classy finish from Eden Hazard’s cross and doubled the lead on the stroke of halftime when he sent keeper Simon Mignolet the wrong way from the penalty spot.

Surprisingly, it was the first penalty Torres had taken in English football.

Mata was on hand to make it 3-0 in the 49th minute after Torres let fly with his left foot and the ball cannoned against the woodwork. Sunderland responded with Adam Johnson’s sweetly-struck shot, but Chelsea stood firm in the face of some belated home pressure to move to 29 points, seven behind Manchester United.

QPR drew for a third match in a row since Harry Redknapp replaced Mark Hughes as manager and have now surpassed the 15-match sequence without a win from the start of a Premier League season recorded by Swindon Town in 1993-94. James McCarthy scored two goals for Wigan, either side of QPR efforts from Ryan Nelsen and Djibril Cisse.

Arsenal were good value for their win against West Brom but the main talking point was an apparent dive by Santi Cazorla in the 26th minute under challenge from Steven Reid who appeared to make no contact with the Spaniard.

“I’m sorry if it wasn’t a penalty but I have spoken to Santi and he said he was touched and lost his balance. Maybe he made more of it, I don’t know,” was Arsenal manager Arsene Wenger’s response to Cazorla’s tumble which allowed Arteta to settle his side’s nerves.

“Of course I will speak to Santi if he has not been touched. I will look at it, don’t worry.”
West Brom boss Steve Clarke was not impressed. “I think we were hard done by,” he said. “There was clear daylight between Steven Reid and Santi Cazorla.”

There was no question about the legitimacy of Arsenal’s second penalty in the 64th minute when Alex Oxlade-Chamberlain was taken out in the area by Chris Brunt.

Swansea may have lost at home to Norwich in a thrilling encounter in south Wales but former Rayo Vallecano striker Michu’s stock is soaring. The Spaniard is now the Premier League’s top scorer with 12 goals.

Goals from Steven Whittaker, Sebastien Bassong and Grant Holt had given Norwich a 3-0 lead at halftime.