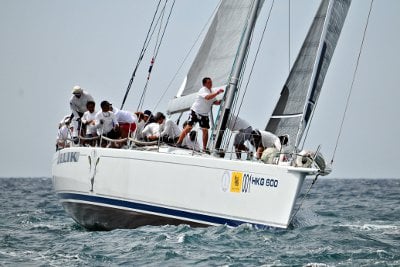 PHUKET: Blue skies and consistent winds marked the final day of the 2012 Phuket King’s Cup Regatta in fitting style yesterday as teams and their boats assembled at the start line in a final bid to resolve their class contests. Some results had effectively completed on Friday, but most of the classes were anticipated to deliver a thrilling final day action.

Frank Pong and his Jelik team powered home in first place in IRC Zero class, ahead of Thai team Won Ma Rang. Less than three minutes separated them at the close with the Hong Kong team eventually coming out on top after a week-long battle. His Jelik boat had raced at and won the Phuket King’s Cup Regatta before, in 2007.

“We decided last night just to have a good clean race and keep out of trouble. Won Ma Rang crossed ahead of us, but we picked up more wind on the opposite side. It was a close race, but we had a point-score advantage going into the final round,” said Pong.

“I have to say, Won Ma Rang has really come forward compared to two years ago. They practice hard and have great people. We’re both here every year, and I’ve been here four or five times with this boat. It’s been four years since our last win! We’ve been blessed with six perfect days – even the reserve day had good wind! Deservedly, the Phuket King’s Cup is itself the King of Regattas in Asia,” he added.

Jaray Tipsuk, skipper of Won Ma Rang, said, “The conditions were great for racing, and it was a very enjoyable challenge. This is my 25th Regatta, so I know the race well and always expect a strong challenge. The crew will be the same next year when we return to race in next year’s Phuket King’s Cup Regatta. Our next race is in the Singapore Straits so we will prepare for that now.”

In Platu One Design class, there’s been an enjoyable week-long contest between Thailand’s Tuay Lek and three Japanese boats. Junichi Ishikawa won in the final race, skippering The Beaver to take the win, with Tuay Lek coming home in second. The class finished with Tuay Lek on top by just a two-point margin. This class has hosted a magnificent title fight this year, and Thailand’s “home team” have come out on top.

Premier class has also seen a great contest unveil itself over the course of the week. Pine-Pacific won the final two races, but it was Richard Dobb’s Titania of Cowes that won the class, making it back-to-back Phuket King’s Cup Regatta wins for the British team.

In the final Modern Classic class race, Peter Wood’s Windstar team performed well for the victory, ahead of Tim Costello’s Patrice III. However, Patrice III won the class by a single point.

Mojo, skippered by Peter Wilcox, came first in the final Multihull class, beating nearest rival, Fantasia skippered by Andrew Stransky. The boats have been neck-and-neck all week, and at the end of the final race, just a single point separated the two teams in the class with Mojo taking the overall title.

Han’s Rahmann’s Voodoo team have been on hot form all week, and recorded another strong victory in the final race of the Firefly 850 Sports class. There was a 10-point gap between them and runners-up, Dyer Straits— Media release